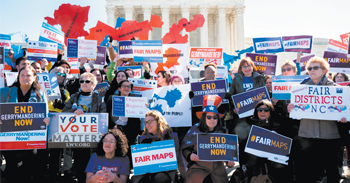 Because the U.S. Supreme Court has ruled federal courts aren’t the place to settle partisan gerrymandering disputes, opponents of North Carolina’s district maps took their case to state courts and won. The state Democratic Party persuaded a three-judge panel that Republican-drawn General Assembly districts discriminated against Democrats based on their political beliefs and voting history. They argued that gerrymandered district lines violated the North Carolina Constitution, not the U.S. Constitution.

With the panel’s ruling last week, Tar Heel political maps for the state legislature are unconstitutional and must be redrawn before the 2020 elections, the court decided. Cumberland County is among the districts likely to benefit from the change. The judges found that “The North Carolina Supreme Court has consistently held that ‘our government is founded on the will of the people,’ that their will is expressed by the ballot.” The district maps were drawn in 2017 to replace maps drawn in 2011, that had also been ruled unconstitutional. Both sets of maps were drawn by North Carolina’s Republican-led legislature. That fact helped the judges conclude that the revised district lines violated the state constitution because “it is the carefully crafted maps, and not the will of the voters, that dictate the election outcomes in a significant number of legislative districts.”

The decision may be the final word in this lengthy legal battle because at least one top Republican lawmaker said he doesn’t plan to appeal the ruling.

“This is an historic victory for the people of North Carolina,” said Bob Phillips, executive director of Common Cause North Carolina, one of the groups that sued to overturn the maps. “The court has made clear that partisan gerrymandering violates our state’s constitution and is unacceptable.”

The panel, which consisted of two Democrats and a Republican, was unanimous in its ruling.

After the loss, Republican Senate leader Phil Berger said he wouldn’t appeal and would instead start drawing new maps. “Nearly a decade of relentless litigation has strained the legitimacy of this state’s institutions, and the relationship between its leaders, to the breaking point. It’s time to move on,” he said. Wayne Goodwin, chairman of the North Carolina Democratic Party, criticized Republicans for the maps, which were overturned on partisan grounds, as well as the 2011 maps that were overturned on racial grounds.

“From targeting people based on their race to dividing them based on their political beliefs, Republicans for a decade have rigged our state and silenced voters to cling desperately to power,” he said.
The court gave the legislature until Sept. 18, to draw new district maps. The judges told lawmakers they would reschedule the elections in 2020 if the legislature can’t come up with new maps in time. “The Court retains jurisdiction to move the primary date for the General Assembly elections, or all of the State’s 2020 primaries, including for offices other than the General Assembly, should doing so become necessary to provide effective relief in this case,” the ruling said.