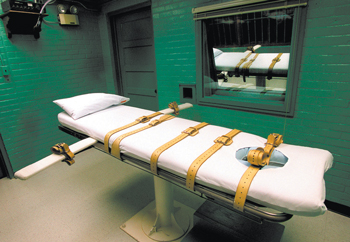 North Carolina’s Supreme Court has heard from six death row inmates who say a repealed law on race and capital punishment should let them be resentenced to life without parole. Justices are reviewing testimony heard late last month. Four death row inmates, convicted in Cumberland County, were briefly resentenced to life without parole when the general assembly approved the Racial Justice Act in 2009.  The law was passed by a Democratic-controlled legislature. Most of the 150 death row inmates at the time applied for relief under the new law. Pending cases, however, were voided when the RJA was repealed in 2013 by a Republican-majority legislature. Justices also heard from attorneys representing two other death row prisoners whose RJA claims were not decided before the law’s repeal. The short-lived RJA prescribed that condemned men and women could seek life sentences by using statistical data to show that their trials were tainted by race.

One of the death row inmates who received a life sentence that was reversed is Quintel Augustine. He was convicted of fatally shooting Fayetteville police officer Roy Turner, Jr. in 2001. James Ferguson II, an attorney for Augustine, said the cases before the state Supreme Court present an opportunity for justices to highlight their responsibility to correct the racial injustice that’s been going on for so long in capital cases. He said to truly understand the disenfranchisement of black defendants, justices needed to “stand back and take a long view” of the history of capital punishment. Changes to the system were always met with resistance — sometimes subtle, sometimes not — but the law, he said, showed clear-cut evidence of racial discrimination in jury selections.

“What then is the role of the judiciary?” Ferguson asked.

Cumberland County Superior Court Judge Gregory Weeks re-sentenced Augustine to life in prison.  Weeks’ ruling in the case and three others were part of a larger effort to root out racial bias in jury selection and eliminate racial discrimination altogether from capital cases. “The Racial Justice Act represents a landmark reform in capital sentencing in our state,” Weeks said in Fayetteville. “There are those who disagree with this, but it is the law.”

The question before the court is whether the enactment and repeal of the RJA impairs defendants’ constitutional rights to relief. Weeks retired soon after his rulings were made.

“Never before has a state done what North Carolina has attempted to do here,” said Cassandra Stubbs, director of the ACLU Capital Punishment Project. “Now that the RJA is repealed, the state’s position is to forget all the evidence of racial bias.”

The Supreme Court has to decide if Augustine and the three others granted relief from the death penalty were properly resentenced to death without a hearing following the RJA’s repeal. Justices also have to decide if the other death row inmates who had RJA cases pending at the time of repeal are entitled to the same relief.