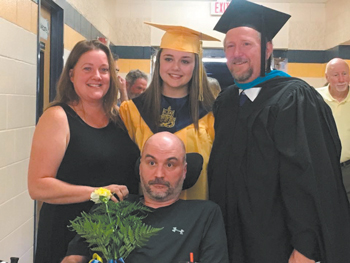 It was two years ago in August that Jimmy Blackmon began having problems with one of his hands. Later, he lost control of the left side of his body, then the right. The diagnosis was Lou Gehrig’s disease, or ALS.

The disease advanced, upending life for Blackmon’s family and putting him a risk of not being able to see his daughter, Taylor Blackmon, walk across the stage next year at Cape Fear High School and get her diploma.

But that all changed because of a series of events involving caregivers, counselors and hundreds of people Blackmon and his family don’t even know.

Susan Tally, a nurse with 3HC Hospice who has been helping care for Blackmon, approached Cape Fear guidance counselor Kimberli Mayo. Tally told Mayo of the situation Jimmy Blackmon was facing and his desire to see Taylor graduate.

Mayo went to Brian Edkins, who is in his first year as principal at Cape Fear after previously serving at South View and Scotland High Schools.

The story touched a heartstring with Edkins, who lost his mother in August of his senior year in high school. “I said, “Man I wish my mother could have seen me graduate,’” Edkins said. Edkins requested a meeting with Cumberland County Schools superintendent Dr. Marvin Connelly Jr., himself a recent cancer survivor.

He told Connelly the story about Blackmon’s battle with ALS, about having a daughter with superb academic standing who might not be able to have her dad watch her graduate.

Edkins wanted permission to hold a mock graduation, or graduation practice, whatever Connelly would like to call it. “I give Dr. Connelly credit,’’ Edkins said. “He didn’t bat an eye. He didn’t hesitate.’’

Once he had permission, Edkins had no trouble pulling the event together. “As we started to plan and talk to people, it continued to grow and grow,” he said. The love of the school and community for a Cape Fear family member caused everyone involved to want to make the night special.

Band director Michael Williams and choral director Jason Britt got behind it, as did the Cape Fear Naval JROTC detachment. Marty King, a Cape Fear teacher who does professional makeup on the side, did Taylor’s makeup for the evening. King lost her mother to ALS at a young age.

Edkins sent out emails inviting members of the Board of Education and the Cumberland County Schools cabinet. To his surprise, 80% of them, including Dr. Connelly, showed up. Edkins also invited Taylor’s senior classmates. At least half of them showed up.

Adding a further boost to the crowd in the Cape Fear auditorium that Thursday evening about two weeks ago, Colt athletic teams who were practicing outdoors cut their workouts short and came into the auditorium for the ceremony. The Cape Fear cheerleaders also assembled and sat together.

“We presented the colors, the band played the national anthem, we recognized the board members, we gave them the whole graduation,’’ Edkins said.

A carnation is given to graduates to present to someone who helped them reach their goal. Taylor gave one to her mother and one to her dad. “It was amazing and special, standing back and watching her dad receive his carnation,’’ Edkins said.

Angela Blackmon, Jimmy Blackmon’s wife, was also impressed. “It was amazing the outpouring of what he was able to accomplish in a week,’’ she said of Edkins.

She was also moved by Connelly, who attended the ceremony and gave a lengthy speech. “People say that’s the most he’s spoken in a long time,’’ she said of Connelly, who only recently returned to full-time work after beating throat cancer. “That he went to those lengths to give a speech like he would at a regular graduation was very sweet,’’ Blackmon said.

Angela Blackmon said her daughter plans to attend UNC-Pembroke and study nursing. But her graduation from Cape Fear next year will be hard-pressed to top the one she had earlier this month.

“I’m so grateful and thankful they put that together for him (Taylor’s father) so he could see her in her cap and gown,’’ Angela Blackmon said.