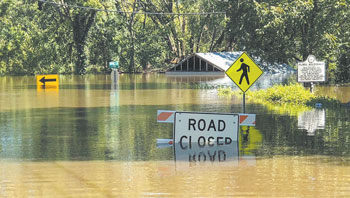 Hurricane Florence was a powerful and long-lived Cape Verde hurricane that caused extensive damage in the Carolinas in September 2018, primarily as a result of freshwater flooding. Florence dropped 35.93 inches of rain in Elizabethtown, becoming the wettest tropical cyclone recorded in the Carolinas, as well as the eighth-wettest overall in the contiguous United States. The first major hurricane of the 2018 Atlantic hurricane season, Florence originated from a strong tropical wave that emerged off the West Coast of Africa. The system became a tropical storm on Sept. 1 and fluctuated in strength for several days over open ocean. Rapid intensification occurred on Sept. 4–5, culminating with Florence becoming a major Category 4 hurricane with maximum sustained winds of 130 mph.

As forecast models indicated an increasing threat to the Southeastern United States, North Carolina Governor Roy Cooper declared a state of emergency on Sept. 7. Transportation rules for farmers were waived to enable faster harvesting. President Donald Trump declared an emergency in North Carolina, granting the state access to federal funds. Strong wind shear then tore the storm apart, and by the evening of Sept. 13, Florence had been downgraded to a Category 1 hurricane, though the storm began to stall as it neared the Carolina coastline.

An overnight curfew was established in Lumberton for the duration of the hurricane. Early on Sept. 14, Florence made landfall just south of Wrightsville Beach and weakened further as it slowly moved inland. Despite making landfall as a weakened Category 1 hurricane, Florence still had enough wind speed to uproot trees and cause widespread power outages throughout the Carolinas. A ridge of high pressure over eastern North America stalled Florence’s forward motion for several days while making landfall.

This led to Florence moving forward at only 2–3 miles per hour; the storm continually dumped heavy rain along coastal areas from Sept. 13, when the outer rain bands first began to be felt, to Sept. 15, when the storm was still stalled out only a few miles west of Wilmington. Coupled with a large storm surge, this caused widespread flooding along a stretch of the North Carolina coast, from Wilmington to New Bern. As the storm moved inland, from Sept. 15 to 17, heavy rain caused widespread inland flooding in Fayetteville, Lumberton and Smithfield as major rivers, including the Cape Fear and Lumber, spilled over their banks.

Most major roads and highways in the area experienced some flooding, with large stretches of I-40, I-95 and US Route 70 remaining impassable for days after the storm had passed. The city of Wilmington was cut off entirely from the rest of the mainland by floodwaters. At least 54 deaths were attributed to the storm. Property damage and economic losses in the United States reached $24 billion. Estimated insured losses ranged between $4.8–5 billion. One preliminary estimate for North Carolina was nearly $17 billion, more than the damage from Hurricane Matthew and Hurricane Floyd combined.

The first major hurricane of the 2018 Atlantic hurricane season, Florence originated from a strong tropical wave that emerged off the West Coast of Africa.