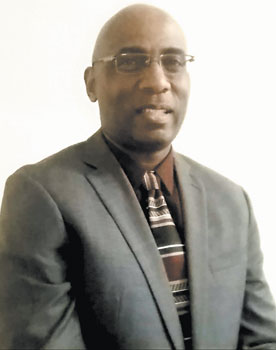 When the Fayetteville Symphony Orchestra set out to find a new executive director, the committee was delighted to receive applications from around the world. In the end, it was a Fort Bragg soldier who won their confidence. Jesse L. Hughes Jr. is retiring from the Army and is set to begin his tenure at FSO Dec. 4. Hughes has played the trumpet professionally and has more than 15 years of leadership in the Army as a musician, instructor and organizational adviser, managing 28 military-connected musical organizations and 400 personnel. He has extensive experience in organizing and coordinating high profile musical events. Hughes has a Bachelor of Music in music performance from Wichita State University, a Master of Music in jazz studies from Howard University and a Ph.D. in Educational Leadership from Northcentral University.

“We did a national search, and we had some international candidates, which we did not expect,” said Deborah Teasley, FSO interim president and CEO. “The committee, comprised of board and nonboard members, went through the applications and did a first screening and some phone interviews and then narrowed the group and did another round of interviews.”

Candidates were interviewed and the top seven were asked to write a scenario about their vision for the future of the symphony. “This allowed us to see their writing and their vision for FSO,” said Teasley. When the time came to select someone for the position, Teasley added, “The search committee’s recommendation was unanimous.”

Although Hughes’ resume checked all the boxes from experience and educational requirements to management experience as well as a knowledge of the performing arts, it was his personality that stood out. “It was clear he is someone who had vision and would jump in and help in a variety of situations that come operating nonprofits,” Teasley said.

Hughes knew he wanted to stay in the area after leaving Fort Bragg, finding a job that matched his skill set and passion so perfectly was a bonus.

His music career started in earnest when Hughes was in high school. At 15, he was playing the trumpet and taking music lessons. At 18, he was at college on a music scholarship. “I went all the way through college and grad school,” said Hughes. “Then I got interested in military bands and started going to auditions. The Army was the branch most interested in me. I joined with the intent to do one tour and see the world and then get out. Once I got in, though, I was hooked. As I progressed, I wanted to learn more about how things work behind the scenes as well. In 2013, I enrolled in a doctoral program in educational leadership.”

Hughes said he is looking forward to establishing a rapport with the community and with the other arts organizations here. He also has some big plans for helping FSO continue to grow. “I want to capture a wider audience and extend the organization’s reach to the schools to help solidify the future of the performing arts,” Hughes said. That might sound like a tall order for some, but Hughes disagrees. “It is like eating an elephant. You do it one bite at a time. There are a lot of people who don’t know there is a symphony here.” And he plans to change that.

There are already initiatives in place that make FSO accessible and unintimidating to those unfamiliar with the symphony. “The Music Nerd,” Joshua Busman, who has a Ph.D. in musicology from the University of North Carolina-Chapel Hill, hosts a preconcert chat before most every performance. He spends about 45 minutes before each concert talking about the performers, the composers and their inspiration for the pieces they wrote as well as many other interesting facts that make the music make sense.

The symphony was founded in 1956, and its mission is the educate, entertain and inspire the citizens of Fayetteville and the surrounding era. That means connecting with audiences. Making concerts affordable is one way to work toward achieving that goal. “We are totally indebted to our major donors,” said Teasley. “Our biggest donor is the Arts Council of Fayetteville/Cumberland County, but we also have a variety of grants. In our program, we have 29 corporate sponsors who give their money because they believe in the symphony and believe in bringing music to the community. We also have an endowment. The endowment, which has been gifted to symphony, provides our operating funds. Tickets to our concerts cost $25, and we have discounts for seniors, the military and kids. It is an incredible bargain.”

There are several concerts remaining in the season. Thursday, Nov. 14, is “Copland in Paris.” It will be at St. John’s Episcopal Church on Green Street. “It is performed by three musicians,” said Teasley. “A flute, a piano and a clarinet. It features the music of Aaron Copland, the era in the 1920s and 30s, and his peer composers. The music is incredible. It is going to be a wonderful performance.”

Saturday, Dec. 7, don’t miss “Deck the Halls” at Fayetteville State University’s Seabrook Auditorium. “That is our community holiday concert … and we are doing it jointly with Cumberland Choral Arts (formerly the Cumberland Oratorio Singers) and the Fayetteville  Academy choir,” said Teasley. “It will be a huge production. It will be everything from singalongs to nice classics and even some contemporary music.”

Find out more about FSO, programs and future concerts at http://www.fayettevillesymphony.org/. Tickets are available on the website as well.