Acclaimed “Last Out: Elegy of a Green Beret” comes to the Crown 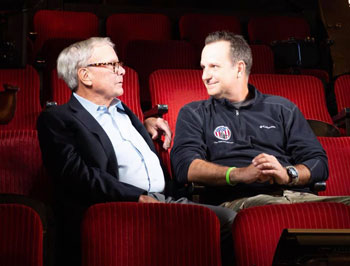 When military storylines play out in Hollywood films, TV shows and plays, they barely skim the surface of the reality of what military life is like, if the stories are even accurate. “Last Out: Elegy of a Green Beret,” opening in Fayetteville Dec. 7, promises a realistic and vivid image of the sacrifice that comes with serving our country.

The production is quickly becoming a success, as NBC’s Tom Brokaw, ABC and other media networks are all touting its magnificent and moving storytelling. "You know all of our movies are about the first in — the Navy SEALs, the Army Rangers, the Green Berets, 12 strong, the first in,” said Scott Mann who wrote the play and plays the main character, Danny Patton. “But you never hear about the men and women who are last out — the ones who go back day after day, week after week, month after month, like so many of our warriors at Bragg who have 10, 12, 14 deployments. I thought, what if we could actually get veterans together and tell that story about what this long war has been like for that percentage of our population?”

The story, in many ways, is biographical, although Mann says the story is also based on the experiences of service members and their families that he and his wife knew.

The story takes place in the Fayetteville/Fort Bragg area. The play is centered around a Green Beret team sergeant — Master Sgt. Danny Patton. He is killed in the very first scene. His desire is to rest and to go to Valhalla. But he’s holding on to something he can’t let go of, so he’s stuck between the fire base and his living room — his personal purgatory. His best friend, Kenny Suggins, who was killed in the Pentagon on 9/11, played by Leonard Bruce,  along with some other operators from Valhalla, come and take the form of people in Danny’s life who made his heart pump the most blood, both good and bad, in an attempt to shake him loose to see if he can figure out what he’s holding on to.
Everyone involved with the production has a military background or ties to the military in some way.

The minimalistic set allows for the audience to focus on the story. For Ame Livingston, the director who also plays the role of Danny’s wife, Lynn Patton, the story is  meaningful, especially coming from a family with a rich military history. She wanted it to be something that could be told in any setting. “When I was first working on the play, I said to Scott, ‘I want to make this story so strong that we could do it in a bathroom or we could do it on Broadway,'” she said.

In her 35 years of performing, Livingston said that “Last Out” is the most important story she’s been able to tell to date.

“We go in and hit your heart with a hammer and then we spend the last 20 minutes or so of the show picking the pieces back up for you, so at the end when the lights come up, people don’t know what to do with their hands — you know?” said Bryan Bachman, who plays Caiden Patton and several other characters. “They don’t know what to do with themselves because they’ve experienced something really raw and real.”

Audience members, whether they are civilians or military, can see themselves in the storyline. “The response is pretty visceral,” said Bruce.  “A lot of people who have had similar experience are heavily impacted by the play because they see part of their story being told on stage. People are seeing their lives being validated.”

The team is excited to bring a play to Fayetteville that shares the lives of so many people who live in the area, especially since three of the cast members were stationed at Fort Bragg and the tour manager, Kari Ellis,  worked at the Fayetteville Police Department. As a traveling show, however, funding is an obstacle. “We need support bringing it here. It costs around $30,000 for us to travel here. We are a nonprofit,” said Ellis.

The show will play at the Crown on Saturday, Dec. 7, at 2 p.m. and 8 p.m. and on Sunday, Dec. 8, at 2 p.m. For more information about the play, visit http://www.lastoutplay.com/ and visit CapeFearTix.com to purchase tickets.

Pictured: NBC's Tom Brokaw talks to Scott Mann about "Last Out: Elegy of a Green Beret."