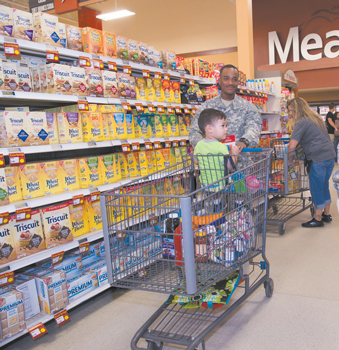 The military commissary agency has been required to track customer savings since fiscal 2016, to help defense officials and Congress monitor the commissary benefit. Commissary customers save 25% more than in civilian grocery stores. The upward trend in fiscal 2019 averaged 25.6%, according to a report from the Defense Commissary Agency. Overall, the savings are up from 23.9% for fiscal 2018. But savings in overseas stores declined from the 2018 level. Officials attribute the drop overseas to the lower cost-of-living allowance in fiscal 2019.

The overall savings level for U.S. stores was 22.3% for fiscal 2019. DeCA compares prices with up to three commercial grocers, including one supercenter, in the local area of each commissary in the U.S. Fort Bragg is the largest Army post in the country and has two full-size commissaries. The comparison looks at 38,000 items at a regional level and local prices on about 1,000 products that are representative of a shopper’s typical market basket, officials say.

For years, commissary savings were touted as an overall 30%. But, in 2016, as mandated by law, DeCA established a baseline of savings using a more thorough methodology. Congress now requires the agency to maintain savings levels that are reasonably consistent with the 2016 baseline, since the agency can now use variable pricing — lowering or raising prices on items, rather than selling them at cost, as they did for decades.

Commissary officials have had the authority to do this for several years, as a means of being competitive with local stores, and to allow commissaries to use some of the profit made to reduce the amount of taxpayer dollars — over $1 billion a year — that’s used to run the stores. Taxpayer dollars have been a target of people in DoD in efforts to save money. One retiree contacted Military Times to say he’s been shopping at commissaries for more than 50 years, “and from what I can see, prices are noticeably going up!”

Savings depend on the items, as well as the region. For example, there are more than 900 items in the commissary’s Your Everyday Savings, or “YES!” program, which lowers prices year-round on items that commissary customers purchase the most. That has contributed to the increase in savings, said Robert Bianchi, a retired Navy rear admiral who is a Defense Department special assistant for commissary operations.

The YES! program is designed to help commissaries level the playing field when it comes to the perceived value of the benefit, Bianchi added.

Too many consumers get a false impression about the value of the overall savings of a civilian grocery store based on a few loss leaders. These are items that stores are willing to accept revenue losses on so they can attract consumers. Bianchi said a commissary’s grocery department — for example, packaged foods — is the main driver of savings for commissaries in the South Atlantic region. The 30 stores in the region showed Fiscal Year 2019 savings of 20.4%.