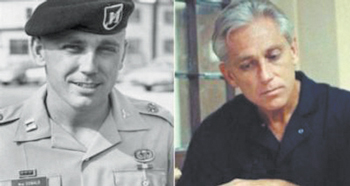 Fifty years ago this month, U.S. Army Captain Jeffrey MacDonald slaughtered his pregnant wife and two young daughters in their apartment on Castle Drive in Fort Bragg’s Corregidor Court housing area. MacDonald, now 76, has adamantly maintained his innocence. Federal prosecutors alleged that MacDonald killed his wife, 26-year-old Colette McDonald, and their daughters Kimberley, 5, and Kristen, 2, with a knife and an ice pick, then stabbed himself to make it look like he was attacked while defending his family. Up & Coming Weekly Reporter Jeff Thompson was a local radio journalist for more than 40 years before joining U&CW four years ago. He covered the sensational event as a young reporter and has a vivid memory of the morning the MacDonald murders occurred. This is his report:

Feb. 17, 1970, was a miserable day in more ways than one. During the predawn hours, it was cold and wet. It had been raining for several hours. In those days, I got up early and went to work at 3 a.m. My routine was to check on overnight crime by driving downtown to the police station on Bow Street and the sheriff’s office in the basement of the old courthouse. It was so cold that day that my car wouldn’t start, so I called the sheriff’s office Capt. Don Wade. I asked him if he would have Deputy Leroy Graddy come by my house in Arran Hills to jump-start my car. I knew Leroy worked in the 71st area.

Captain Wade said he had no one available to help because his officers were tied up at roadblocks at Fort Bragg. He said military authorities told him a woman and two children had been murdered on post and that an Army officer had been hospitalized at Womack Army Medical Center. I had been in the broadcast news business for two years in what turned out to be one of the biggest stories of my career — and my car wouldn’t start!

I called a friend who lived down the street and asked to borrow his car. I drove downtown and asked Wade if he had any additional details about the murders on post. He said he’d been told that the word “PIG” had been scrawled on the headboard of the woman’s bed to mimic the Charles Manson murders six months earlier and that the surviving officer was a Green Beret doctor who had been clubbed and stabbed with an ice pick.

I hurriedly drove to the WFNC radio studios to prepare the 6:30 a.m. newscast. Instead of airing the news live, I decided to record it for playback so I could drive to Fort Bragg. It was an open post in those days, and I had no difficulty finding the housing area where the triple murder investigation was unfolding. Responding media representatives were able to park on Castle Drive in front of the apartment and walk to within 30 feet of the building. I observed an Associated Press photographer walking along the side of the apartment, unrestrained, snapping pictures through the windows.

The area was muddy. I saw military police officers casually traipsing in and out of the MacDonald apartment. Suffice it to say, law enforcement crime scene methods have changed a lot in 50 years. Having confirmed reports of what happened, I returned to the radio station to update the news. I called the United Press International office in Charlotte, North Carolina, to report the story. It went nationwide because of its similarity to the Tate-LaBianca murders perpetrated by the Manson “family” in August of 1969. Before hanging up, the UPI correspondent had a final question: “Is there any suspicion that the husband and father had committed the murders?”

The crime scene was gruesome: 5-year-old Kimberly was found in her bed, having been clubbed in the head and stabbed in the neck between eight and 10 times. Two-year-old Kristen was in her bed and had been stabbed 33 times with a knife and 15 times with an ice pick. Colette, who was pregnant with her first son, was lying on the floor of her bedroom. She had been repeatedly clubbed and stabbed 21 times with an ice pick and 16 times with a knife. MacDonald’s torn pajama top was draped across her chest.
M.P.s found MacDonald next to his wife, alive but wounded. His wounds were not as severe nor as numerous as those his family had suffered. He was taken to the nearby army hospital. MacDonald suffered cuts and bruises on his face and chest, along with a mild concussion. He also had a stab wound on his left torso that a staff surgeon described as a “clean, small, sharp” incision that caused his left lung to partially collapse. He was released from the hospital after one week.

MacDonald was placed on military house arrest pending the outcome of the initial investigation. A military Article 32 hearing was held in July of 1970 to determine whether there was sufficient evidence to charge him with the murders. He was exonerated in a matter of days and left the Army. MacDonald became an emergency room physician in southern California. But in 1979, he was indicted in federal court in North Carolina and sent to Raleigh to stand trial. The rest is history.