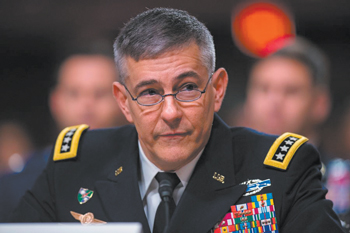 Army Gen. Stephen Townsend’s No. 1 concern as commander of U.S. Africa Command is that another deadly attack like the one in Manda Bay, Kenya, will occur on his watch. That’s why AFRICOM is now examining the security at Manda Bay and other U.S. installations throughout the entire continent. On Jan. 5, al-Shabab militants attacked U.S. and Kenyan forces at Manda Bay Airfield, which led to the deaths of Army Spc. Henry Mayfield Jr., 23, and two U.S. Department of Defense contractors, Dustin Harrison, 47, and Bruce Triplett, 64.

Townsend, 60, is a four-star general who has served as Commander of U.S. Africa Command since July 26, 2019. He previously commanded Fort Bragg’s 18th Airborne Corps from May 2015 until January 2018. Townsend also served with the 82nd Airborne Division. He fought in Operation Urgent Fury, Operation Just Cause and Operation Uphold Democracy. Townsend commanded the 3rd Stryker Brigade Combat Team, leading it in the Battle of Baqubah during the Iraq War, and later commanded the 10th Mountain Division during the War in Afghanistan.

While serving as Fort Bragg’s commanding general, Townsend, in late August of 2016, took command of the Combined Joint Task Force — Operation Inherent Resolve in Iraq —where he served until 2017, after which he returned to Fort Bragg. Raised in an Army family, Townsend was commissioned as an infantry officer upon graduating from North Georgia College in 1982. He has led and commanded troops at every echelon from platoon to corps and combined joint task force, to include leading all U.S. and multinational forces fighting the Islamic State in Iraq and Syria.

“I think it’s self-obvious we were not as prepared there at Manda Bay as we needed to be,” Townsend told lawmakers on the Senate Armed Services Committee last month. “Al-Shabab managed to penetrate onto that airfield. They killed … three Americans and destroyed six aircraft there,” he said. “We weren’t as prepared, and we’re digging into that to find out why that’s the case.”  The command has launched a senior-leader-led investigation examining the circumstances surrounding the attack, and Townsend said approximately 120 infantrymen are now working to secure the area and install proper measures of defense.

The incident has prompted AFRICOM to evaluate security at other areas across the continent as well, especially since Manda Bay was considered a safe area, Townsend said. “Al-Shabab has shown their reach, and the danger that they pose, and I think that we need to take that seriously,” the general said. “So, I’m looking with a clear eye at every location in Africa now.”

In 2019, AFRICOM conducted 63 airstrikes against violent extremist organizations in East Africa. So far, this year AFRICOM has already conducted four airstrikes against al-Shabab militants in Somalia. “What we do is we keep an eye on al-Shabab every day, and we’re looking for ways to reduce their capacity wherever we can,” said Townsend.
The U.S. has approximately 6,000 Department of Defense personnel on the African continent.