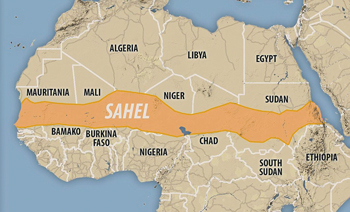 The Pentagon is reviewing whether there needs to be a troop withdrawal in Africa. Sen. Lindsey Graham, R-S.C., and a bipartisan group of lawmakers, united against a Trump administration plan to withdraw U.S. troops from part of Africa, pushed back in an exchange with Defense Secretary Mark Esper during a recent meeting. Graham and Sen. Chris Coons, D-Del., led the charge telling Esper that Congress would not support a U.S. troop withdrawal from the Sahel region in Africa, laying out the reasons to keep the troop presence there. At one point, Graham allegedly told Esper that he could “make your life hell.”  Graham denied making the comment.

Several other lawmakers laid out their case forcefully. “From a broad security standpoint, the Sahel is a tinderbox of terrorist activity and where violent extremist organizations look to use the space to recruit, adapt and evolve,” AFRICOM spokesman Air Force Col. Chris Karns said.

Army Gen. Stephen Townsend, AFRICOM commander, is on record saying that violent extremist group activity in the region has increased 250% since 2018.

The Sahel is the geographic zone in sub-Saharan Africa between the Atlantic ocean and the Red Sea. It includes several nations plagued by international terrorist groups, including Mali, Burkina Faso, Niger and Nigeria. More than a dozen terrorist groups with links to the Islamic State or al-Qaida, like Boko Haram and al Shabaab, are operating there and other parts of Africa.

The upsurge in violence from extremist groups in West Africa is moving south from Mali into Burkina Faso, a former French colony that suffered more than 2,200 civilian deaths in 2019 — a steep increase from the nearly 300 civilian deaths in 2018. Thousands of people in Burkina Faso have been displaced because of the violence. Most recent estimates from the United Nations Office for the Coordination of Humanitarian Affairs indicate that more than 500,000 people were displaced between January 2019 and January 2020 in Burkina Faso.

Graham and Coons argued that the number of American troops there is small, the cost to deploy them is low and withdrawal would abandon a major ally in France, whose army is leading the fight against the terrorists there. The U.S. has approximately 6,000 troops in Africa, including 1,000 special operations troops in the Sahel, the region where four Fort Bragg Green Berets lost their lives two years ago. American forces train local troops, provide aerial refueling to French military planes and collect intelligence.
The senators noted that this is the exact model the Trump administration has been pressing for, where another country leads militarily while the U.S. backs the effort. Graham said it would make no sense to abandon an area where that arrangement is working. Esper explained that he is trying to carry out the National Defense Strategy, which cites Russia and China as the biggest strategic competitors to the U.S., and is attempting to shift American troop priorities accordingly.