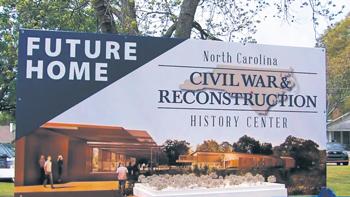 From the beginning, the North Carolina Civil War & Reconstruction History Center has been about inclusion and transparency. The wheels were set in motion in 2007 with a planning grant from the N.C. General Assembly. While the ground has not yet been broken for the facility, plans are moving ahead, and it’s to the benefit of many historically underutilized businesses in North Carolina. This category of businesses includes companies owned by women, African Americans, Native Americans and others.

“The State of North Carolina believes highly in small businesses, which is what drives our economy,” said Tammie Hall, assistant to Machelle Sanders, the Secretary of HUB and the HUB Division Director. “It is important to get them engaged in what we do.”

According to nccivilwarcenter.org, once complete, the four-acre History Center site will include a 60,000-square-foot main museum built outside the U.S. Arsenal’s archaeological footprint, protecting the remnants of the asset seized by Confederate forces in 1861 and leveled by William T. Sherman’s engineers four years later. The existing 1897 E.A. Poe House and three Civil War-era structures are incorporated into the larger, interpretive plan. This project offers the public a repository, not merely of artifacts, but of information and a context for it.

Three Civil War-era houses, known as the history village, were moved to the southern end of Arsenal Park in October 2018. Work on the three houses is on schedule for completion later this month. A total of $2.5 million was budgeted to move and renovate the houses and the job has come in under budget.

In a recent press released, the History Center announced that work on the buildings include:

•  The Arsenal House was renovated primarily for K-12 students. It includes a classroom, a distance learning studio and a technical support room, all part of the Digital Education Outreach Center. The Outreach Center will be an online educational resource to teach the history of the period before, during and after the Civil War to public school students across North Carolina.

•  The Culbreth House was renovated for higher education purposes. It will become the Center for the Study of the Civil War and Reconstruction in North Carolina. A catering kitchen and upstairs offices were added, as was a library, which will house an extensive collection of Civil War and Reconstruction books. It will be used as the offices for the Center’s Foundation.

•  The Davis House required extensive renovation following damage from the move, including adding structural elements, new floors, walls and updated rewiring and heating and air. Plans are for it to be a support building for the buildings and other developments for that end of Arsenal Park.

The next project will be an educational outdoor pavilion area, which is scheduled to be completed next year. Also planned for the site is the 60,000-square-foot building, which will replace the Museum of the Cape Fear and house large scale exhibits, an auditorium and the Center’s operations going forward.

The Center’s use of historically underutilized businesses as contractors is at 82.09%. “It is a huge accomplishment to receive 80%,” said Hall. “It’s a huge plus for our economy.  … (The) state recognizes it as investing in small businesses, which are the ones who grow our communities, and which grow our school systems. Small business is what grows our North Carolina economy.”

“ … Our goal with the Center is to be inclusive with all North Carolinians, not only with our present and future programming, but with our operations and construction, as well.” said John M. “Mac” Healy, chair of the North Carolina Civil War & Reconstruction History Center Board of Directors.