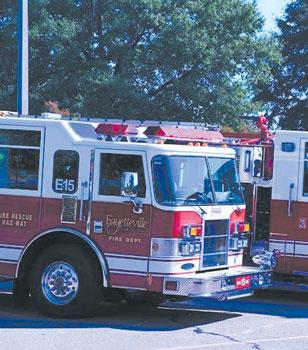 A recent house fire nearly claimed the life of the resident at his home on Brockwood Street in Cliffdale West. The man, whose name is being withheld, told authorities he was overcome by smoke. Fortunately, a neighbor heard a smoke alarm and saw smoke billowing from the eaves of the roof and called 9-1-1. Fayetteville Fire Department units responded to the alarm.

Engine 15 was the first to arrive. Captain Shane Flack confirmed with communications that there was a working fire. Engine 11 and Rescue 2 were on the way, but additional units were dispatched. Battalion Chief Jason Davis said the house was locked with no indication that anyone was home.

As Engine 11 and Rescue 2 arrived, Lt. Beau Culbreth and firefighter Joey Regenhardt forced entry into the house and found the resident unresponsive in the foyer. They pulled the victim out of the house as Firefighters David Cosme-Reyes and Jeremiah Williams advanced a hose line inside to extinguish the fire while also searching for other victims. Captain L.B. Herndon, Lt. Culbreth and firefighter Stacy Ritchie began first aid treatment in the front yard.

The crews inside quickly got the fire under control and completed a search of the entire house. No other victims were found inside. The resident “told us that he had put a pan on the stove to heat up. He left it unattended … and lost track of time,” Battalion Chief Davis said. “When he realized there was smoke in the house, he found the fire too far advanced to put out.”

He was overcome by the smoke on his way to the front door.

Additional fire department crews that arrived rotated in to relieve their colleagues and ensure that the fire was out. Meanwhile, the home occupant regained consciousness and was able to explain what happened leading up to the incident. “A lead medic from Cape Fear Valley EMS arrived and took over primary patient care, assisted by our personnel,” Davis added.

Davis said the fire crews that responded to the fire performed exactly as they have been trained. “Thankfully, we were called early enough to make a difference.”

Unfortunately, this was another fire started by unattended cooking. “Nearly half the house fires we respond to are the result of unattended cooking, and we average a little over one building fire a day,” Davis said.

Seven thousand people are injured in kitchen fires each year in the U.S., and that doesn’t include those who are killed, according to the Fire Safety Advice Center. The kitchen is the single most dangerous place in the home. Time and again, the same problem causes many fires — unattended cooking.

The most important point about cooking is to avoid being distracted. If called away by the phone or by someone at the door, take pans off the heat. It’s easy to forget about them. Turn saucepan handles so they don’t stick out where they can accidentally be knocked over and make sure they aren’t over another stove element. Oven gloves and towels should not be left on the stove after they’ve been used.

By exercising caution, the risk of a kitchen fire can be eliminated. But if a fire does flare up, occupants need to be prepared. Officials say not to fight the fire but leave the scene, call 9-1-1 for help, and let the fire department control the fire.