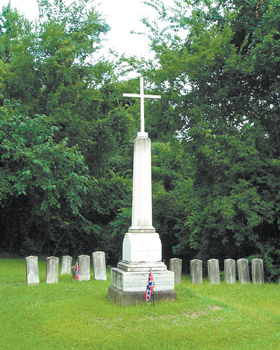 Fayetteville has a rich wartime history, much of it memorialized in Cross Creek Cemetery. One familiar story regards the U.S. Armory, which the Confederates appropriated and used to manufacture weapons, including the Fayetteville Rifle. In March 1865, Fayetteville was visited by Union Gen. William T. Sherman, who destroyed the armory building. Fayetteville is also the site of North Carolina’s first Confederate monument. Since 1868, North Carolinians have been building monuments commemorating the people and events of the Civil War.

The first Civil War monument erected in North Carolina was in Cross Creek Cemetery #1 in Fayetteville. Led by Anna Kyle and Maria Spear, a group of local women raised money to build a monument. Kyle, who served as a nurse in the hospital during the Civil War, established the Confederate Burial Ground soon after Sherman and his army left Fayetteville. She and Fayetteville Mayor Archbald McLean selected a spot to inter the soldiers in the back section of the cemetery overlooking Cross Creek. The Rev. Joseph C. Huske of St. John’s Episcopal Church officiated at a mass burial later in the spring.

The remains of 30 Confederate soldiers, who had fought Sherman’s army and had been buried in various places around town, were reinterred in the new Confederate section of Cross Creek Cemetery. The ladies pieced together a quilt and sold raffle tickets not only in Fayetteville but also in Chapel Hill, Tarboro and Wilmington. Their goal was to raise $1,000. In a war-ravaged economy, they only managed to raise one-third of that sum. Martha Lewis won the quilt in May 1868 and sent the prize to former Confederate president Jefferson Davis.

The ladies employed a local stonemason to construct and install the monument. The memorial was the work of George Lauder, the most productive stonecutter in North Carolina during the 19th century. Lauder, a native of Scotland, also worked on the State Capitol in Raleigh and the Fayetteville Arsenal before opening his own marble yard in Fayetteville in 1845. On Dec. 30, 1868, the monument to the Confederate dead at Cross Creek Cemetery, the first in North Carolina, was dedicated. It was taken down by its owners last week.

This was the fifth Confederate monument raised in the South following the end of the war. The monument consists of a white marble column with a cross at the top. The base of the column contains inscriptions on all four sides. Stanzas from the poem “The Bivouac of the Dead” by Theodore O’Hara appear on the front. Cross Creek Cemetery #1 is the oldest public cemetery in Fayetteville, begun in 1785. The cemetery contains over 1,100 grave markers and is the burial site of many early settlers and notable persons from throughout Fayetteville’s history.

Among the gravestones is a tall stone monument for Revolutionary War hero Robert Rowan, who was the leading town patriot as well as the organizer and a signer of the Liberty Point Resolves.

In the late 1860s, John R. Tolar dedicated another memorial in this section. It honored his father and eight uncles who were killed or disabled during the war. In addition to the Confederate dead, many Civil War veterans — both Southern and Northern — are interred in this part of the cemetery.