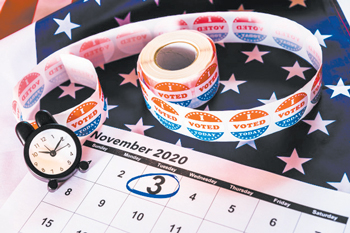 2020 has not been a normal election year. From rallies cancelled because of COVID-19 to talk of mail-in voting and whether or not the U.S. Postal service could support such an endeavour, nevermind concerns about how that might work, voters may want to consider how they will cast ballots this year, including voting early.

An individual’s eligibility to vote is set out in the Constitution of the United States. The Constitution states that suffrage (the right to vote) cannot be denied on grounds of race, color, sex or age for citizens 18 years or older. Beyond these basic qualifications, it is the responsibility of state legislatures to regulate voter eligibility and all elections. In the U.S., elections are held for government officials at the federal, state and local levels.

At the federal level, the nation's head of state, the president, is elected indirectly by the people through an Electoral College. The number of electors in each state is equal to the number of U.S. senators and members of the House of Representatives to which the state is entitled in Congress. North Carolina has 15 electors and requires that electors support the popular vote of the state.

Members of Congress are elected directly by the people. Each state elects two U.S. senators and members of the U.S. House of Representatives, the latter based on population.

The 2020 presidential election could come down to just half a dozen states. Experts generally agree that the key swing states to focus on this year are Arizona, Florida, Michigan, North Carolina, Pennsylvania and Wisconsin, all of which were won by President Trump in 2016.

"Those will be the six most critical states," Paul Maslin, a longtime Democratic pollster, told Newsweek. "There will be others that'll be important in varying degrees," he said.

“The Electoral College creates strange incentives for campaigns to ignore most of the country and pour their attention into a small number of places," Barry Burden, a professor of political science and director of the Elections Research Center at the University of Wisconsin-Madison, told Newsweek.

"Voters in these states should expect to see a lot of advertising, a lot of visits from the candidates and their surrogates and a ton of field activity with offices opening and volunteers appearing at their door," Burden added.

"To some extent, it's not really a national election. It's all about the Electoral College," Newhouse said.

There are many elected offices at the state level, including governor and lieutenant governor in North Carolina. Members of the Council of State are also elected statewide. There are also elected offices at the local level, in counties, cities, towns and townships as well as school districts and special districts that may transcend county and municipal boundaries. According to a study by political scientist Jennifer Lawless, there were 519,682 elected officials in the U.S. as of 2012.

To register to vote in North Carolina, one must be a U.S. citizen; live in the county of his/her registration and have resided there for at least 30 days prior to the date of the election; be at least 18 years old, or by the date of the general election (16- and 17-year-olds may preregister to vote); and not be serving a sentence for a felony conviction, including probation, parole or post-release supervision. In North Carolina once an individual has completed a felony sentence or been pardoned, he/she is eligible to register and vote.

Early voting is available from Oct. 15-31 at a dozen sites around Cumberland County. Registered voters may update their addresses and change vital information in an existing registration record at the early voting site, but they are not allowed to change their party affiliations during the one-stop voting period that precedes a partisan primary.

North Carolina citizens can vote by mail. The election office must receive ballot application requests by Oct. 27, and completed ballots must be postmarked by or received in-person by Nov. 3. For more information, visit the North Carolina State Board of Election’s website.

The Cumberland County Boards of Elections’ office maintains precinct lines and notifies all voters of correct precincts and districts and also provides elected officials, candidates and the general public with reliable information as requested, along with administering the Campaign Reporting Act in Cumberland County. In addition, the elections office is responsible for maintaining contact with precinct officials at all times concerning elections, new laws and training.

The Cumberland County Board of Elections is in urgent need of poll workers for the Nov. 3 general election and the early voting period in October.

The board will follow state guidelines to protect the health and safety of election workers and voters. Social distancing measures and routine cleanings have been put into place and poll workers will be provided appropriate personal protective equipment.

There are 75 polling places in Cumberland County, 35 of them inside the Fayetteville city limits. To locate your polling place, go to ncsbe.gov. Click on Polling Place, Search and then enter your information.

On election day, Nov. 3, all polling sites will open at 6:30 a.m. and close at 7:30 p.m. No politicking is allowed within 50 feet of the main entrance to the polling place. In Fayetteville, those who post political yard signs on their property must remove them within a day or two following the election or be subject to a fine.