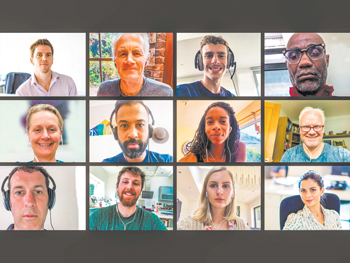 The financial crisis of little more than a decade ago masked a technological revolution, and everyone shelled out small fortunes for smartphones. The scientific fantasy embodied in "Star Trek’s" tricorder had become everyday overnight.

Today, the revolution has been digital rather than technological. This time, the revolution is coming for your job and staging its coup in your home. And it’s happening faster than we originally predicted. Only a decade ago, we were still struggling with what to call the phenomenon of working while not being at work. Telecommuting? Teleworking? E-work? Flex work? Virtual work?

Eventually, what the job market collectively settled on calling “remote work” was something that 44% of global companies didn’t allow as recently as 2018. Contemporary predictions estimated that by 2020, around 50% of the United States workforce would clock their hours from home. An UpWork study from 2017 postulated that more people will work remotely than not by 2027.

Little did they then know that their predictions would be realized before the end of 2020’s Q1. According to a Gallup study, by midMarch, 49% of workers in the U.S. reported having worked from home in the past seven days. Mere weeks later in April, that statistic leapt to 63% — even while some states announced plans to reopen.

Shortly thereafter, several companies announced that they would be shifting most if not all of their workforces to remote or in-office/remote hybrid arrangements.

This means that if your role is a good candidate for remote and flexibly-scheduled work, then you’re potentially competing against 7.8 billion other people for the job. Potential employers will be sizing you up online well in advance of ever offering an interview. Here are three skills to become a digital-based, remote working master and maintain an attractive digital portrait:

Mastering Communication Channels
If nothing else, the sudden shift to remote work has illuminated how time-intensive, in-person meetings could be replaced by a well-written email. There are now means far beyond email for keeping up (Slack, Zoom, Google Meetings, Jira, even video games like Red Dead Redemption), not to mention calendar, content and project management platforms.

Knowing When to Switch Platforms
When it comes to the platforms, apps or software you use to do your work, one size rarely fits all. This became clear to me when my students and I had to make the shift from face-to-face classes to “online-only.” Blackboard served us very well for some remote-based learning but not for everything or everyone. In the end, we added several other digital platforms as satellite learning channels to Blackboard. We shifted to an environment where coursework could be completed as long as you had an internet connection. Our virtual classroom worked because we took stock of what needed to be learned and achieved and then asked what tools work best for achieving those goals.

Designing Your Digital Self to become Discoverable
Search engines favor accounts which publish frequently and regularly. Engagement via likes, shares and external links is also important. To appear in the first page of a search engine’s results involves an amalgam of algorithms, web crawlers, cross-linking, keywords and content.

Maintain your dominance by picking a topical lane (or two) and staying in it. Be consistent, use the same photo for each online account, find a reference guide for what types of content perform best, and make meaningful connections with others online.