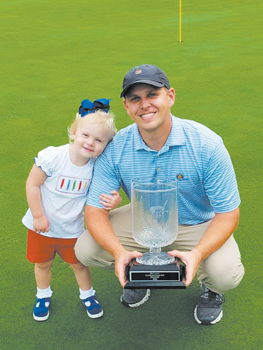 Thomas Owen put the 52nd annual Cumberland County Golf Championship in his pocket even before rain canceled the final round.

Owen shot 68-67 for a 135 total of nine under par at Gates Four Golf & Country Club. It gave him a likely insurmountable lead of nine shots over runner-up Jake Barge.

“It would have taken a pretty special round,” said Owen, when asked if he thought anyone could have caught him. “I was playing well with tough conditions so I would have liked my chances, but it's certainly possible.”

Barge, who shot 70-74 for an even par total of 144, would have liked an opportunity to play one more round.

“I don't think I could have caught him,” Barge said. “My goal was just to put a little pressure on him. As far as catching him, the way he was playing, I don't think that was a possibility.”
Billy West, who tied for third with a 145 total, agreed with Barge.

“Thomas played incredible golf considering how difficult Gates Four was playing,” West said. “The rough was as high as it's ever been out there. No one would have caught Thomas. He was clearly playing the best. He is a smart player with great course management.”

The win continued an amazing streak for Owen in the county championship tournament. Except for a few strokes, he could have five straight victories. He won the title in 2016 and then finished as runner-up three straight years before this year's victory.

“I was motivated to play my best after feeling like I let a couple slip away,” he said. “I didn't want to let another one slip away.”
Owen made 13 birdies and only four bogeys.

“I played really well,” he said. “My putting has really clicked and that's the difference in shooting really good scores. I did not three-putt which is always helpful.”

Owen has a unique way of practicing his putting. He doesn't even have to go outside.

“I putt in my living room quite a bit,” he said. “I have a good rug for putting. Even though, that's not playing golf, it's helpful to just get the ball started on the line you want it to and try to putt the ball to a small target.”

Tournament officials made the decision to cancel the final round after heavy overnight rain following the second round and an unfavorable forecast from the remnants of Hurricane Delta.

“We told the guys when they were checking in Saturday to play hard because we may have to shorten the tournament,” said Gates Four General Manager Kevin Lavertu. “We didn't see any clearing for Sunday and transitioning to cart path only. Plus, we've got some holes that from time to time hold some water on them. Overall, I think it was the right decision.”

Lavertu said the course received six-tenths of an inch of rain overnight.

“Even though it's a competitive event, you still want people to have a little bit of fun,” he said. “If people go out there and they're miserable, it just makes the whole experience bad. I always try to take the pulse of the players and weigh all the outcomes.”

Owen said he understood the decision to cancel.

“I know Gates Four can sometimes get pretty wet out there,” he said. “It can make the playing conditions almost unmanageable on some holes and the forecast was pretty terrible. It was bittersweet because I wanted to play some more golf since I was playing well. But at the same time, I was leading the tournament, so I will take it.”

Owen said he wasn't thinking that the second round might be the last one.

“That never crossed my mind,” he said. “I was a little late to realize how bad the weather was supposed to be. I was just trying to keep the pedal to the metal.”

West, who has played in all but one of the county championships in the past 30 years and is sort of an historian of the event, said it was the first time the final round had been canceled by weather since 1996.

He said another final round was canceled in the 1980s and, ironically, both rain-shortened tournaments were won by Gary Moore.

West was tied for third place with Gary Robinson, also at 145. Both men have won the most county titles with eight.

William Schaefer won the men's open division by shooting 78-79 for a 157 total. He won by one stroke over Luke McCorquodale, Michael Gonsalves and Trenton Reid.

Michael Lane shot 72-73 for 145 to win the senior division by two shots over Gary Moore.

The men's super seniors and the women's division were scheduled to play 36 holes but only played 18.

Clara Brown, who won the women's senior division last year, won the overall title this year with a round of 88. She won by four shots over Lisa Harvey.

There were only four women competing this year and that is a focus for tournament director Bill Bowman.

Bowman has another idea to grow the tournament. Next year, there will be a youth division for players age 13-17.

“We want to try to cultivate players of the future,” he said.

There were only 63 players this year compared to 88 last year. Bowman feels COVID-19 hurt turnout.

“Covid has just overshadowed everything this year,” he said. “We had a lot of last-minute signups because a lot of people didn't think we were going to have it.”

Bowman has worked hard since he took over as tournament director in 2016 to try and increase participation. He said next year's final two rounds would remain at Gates Four but he wants to hold the first round at another county course. Last year, the first round was held at Stryker Golf Course on Fort Bragg.

“Gates Four has been really gracious in helping me retain and build this project,” Bowman said. “We're very excited about next year’s tournament, and the dates for the 53rd Annual Cumberland County Golf

Details and updates can be found on the official CCGC website www.cumberlandcountygolfclassic.com. Further information may be obtained by calling the CCGC Tournament office at 910-391-3859. 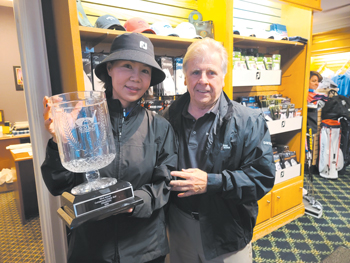