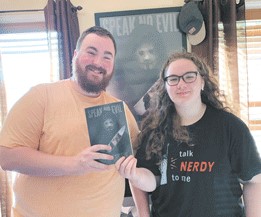 Jared and Janna Rhodes are a brother and sister duo who have always been close despite their 8-year age difference. Jared, 25, is a house parent at Falcon Children's Home and Janna, 17, is a senior at Pine Forest High School. The two wrote a murder mystery book that was released earlier this year and is available online. The pair recently sat down with Up & Coming Weekly to share the idea behind the book, their writing process and future projects.

Tell us how you conceived the idea for “Speak No Evil.”
We kind of have a specific way of talking to one another. Something happened and she said something smart to me and I said, “You better shut up before I sew that mouth shut.” We kind of laughed about it and thought it was an interesting idea. We started discussing it and it became this whole idea of what if there was a serial killer named 'The Seamstress' who killed people who used their words to destroy rather than to build people up. To tell you the truth, it was the easiest project that we have ever worked on, the first draft was probably done in about two weeks.

What is the inspiration behind this book?
We are both musicians and are big TV people. A show that we had started watching is "Broadchurch." It is a British television crime story so that was kind of fresh on our minds. We were also thinking about the show "How To Get Away With Murder." It was almost like the stars aligned and all the information that we needed was in our heads and we were like "let’s just make this happen."

What is the purpose of the book?
I think the main purpose of it is entertainment, but we definitely have something to say in the book as well. We talk a lot about how words mean something. Words can build people up and they can destroy people as well. We thought what better way to show the power of how bad words can be. It is literally having someone take on this persona where he decides to physically shut someone up and then to emotionally and mentally shut the whole town up.
Also, a purpose is to show how two different people can work on something like writing a book or trying to solve a mystery. The two main characters in the book are very much like my sister and I. We kind of use that to make a more cohesive dynamic when it comes to the main
characters.

What can you tell us about the book without giving away any spoilers?
It is set in the fictional town of Little Heaven, Georgia. We follow the exploits of a seasoned detective, Leroy Stone, and his police commissioner, Marleen Stricker. They are trying to find out who is killing these prominent members of the community. 'The Seamstress' is killing people who are not good people for the community or just in general not good individuals. To help out with the case, intrepid reporter Simone Garcia joins forces with the police to essentially uncover what’s going on in this town.

Did you encounter challenges during the writing process?
Yes, just really sweating the details because both of us are very much cut-to-the-chase big picture people. I had a friend of mine read through the first draft. We knew where the story was going but we just needed a little bit more meat so it felt like a more vibrant and cohesive story throughout.

What has been your greatest achievement with this book?
I think it may very well be the book itself. Neither of us ever thought we would write something like this. We love working with each other because we both think the same but we communicate things very differently. We can both say that we have a book that’s out and we did this and it was fun. We just want to do it again.

What do you hope to gain from this book?
Another aspect of my life is that I am a house parent at a children’s home. My boys love this kind of genre so I’ve been reading it to them. Them coming up to me having a theory about who 'The Seamstress' is or them wanting me to read them the next chapter is the best part. The fact that it is resonating with kids that have come from really bad situations and it puts a smile on their face is what we are really after.

Will there be other books in the future?
Maybe, yes. We have nine other books planned from one level to another. I can definitely say that they are not all going to be murder mysteries but they will be in the same universe.

Final thoughts?
Focus on the little details when you read the book. We put in a lot of details that if the right person knows this set amount of information they are going to find out who the killer is by the first couple of chapters. We also have a pen name and it is Grant Griffin. In the foreword and the afterword we write those things in the voice of this fictional author and he gives a thesis of the book and lets us be as weird as possible. It is just a way to spice up the book reading process.