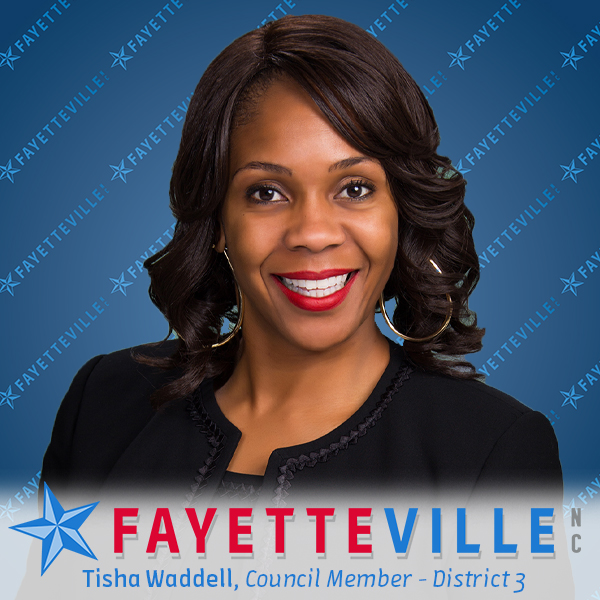 Efforts are underway by Fayetteville City Council to replace District 3 council member Tisha Waddell. She resigned suddenly this past Tuesday citing “egregious actions” of misconduct by Mayor Mitch Colvin and some of her council colleagues. Waddell issued a lengthy five-page open letter outlining her allegation that Colvin has engaged in conflicts of interest and lack of transparency. She charged that the mayor regularly “ignored council policy and used his position to influence and subvert” procedures established by council.

"I am disappointed that former Councilmember Waddell has chosen to resign and make baseless accusations against a substantial number of her former City Council colleagues and private citizens on her way out the door," Colvin said in a statement.

During their years working together, Waddell was regularly critical of Colvin. Five of the nine council members -- Mayor Pro Tem Kathy Jensen, Chris Davis, Johnny Dawkins, D.J. Haire, and Larry Wright -- have been generally supportive of the mayor.

Waddell wrote of “multiple closed sessions” held by city council, one of which included a representative of a private equity firm, Bernard Capitol Partners, and Fayetteville Public Works commissioners on BCP’s proposal to invest nearly $1 billion to operate the city's utilities for the next 30 years. PWC eventually declined the offer. Closed meetings of public bodies are governed by state statutes that limit participation and topics of discussion.

Waddell urged city council to conduct an independent review of her allegations and that if they fail to do so, “the citizens of this city should begin calling for an investigation of their own regarding corruption of members of the Fayetteville City Council.” She went so far as to suggest that the State Bureau of Investigation of the FBI probe Bernhard Capitol Partners involvement with the mayor.

Waddell asked that City Attorney Karen MacDonald “guide the council” in selecting her District 3 successor by November 30. She said she was honored to have served the city. “I believe I have done so ethically, legally and according to the community’s expectations.”

City Manager, City Attorney and Members of the City Council,

This letter is to serve as notice of my immediate official resignation from the Fayetteville City Council. City Manager Hewett, my badqe, city tablet, and cell phone are at City Hall for retrieval on your desk. Would you please advise if I need to do anything else to out process? City Attorney McDonald, per Council Policy 175·11, please guide the City Council according to N-C·G·S· § 160A-63 "the City Council shall make the selection within 30 days of the event mandating the replacement".

I hope that in the interest of the Citizens of District 3, Council will promptly adhere to the policy as outlined and appoint someone to represent the District no later than November 30th, 2021.

I have been honored to serve in this capacity· I believe I have done so ethically, legally, and according to the community's expectations. This decision was not easy to make as I
have taken my role as a representative of the people, for the people, and by the people very seriously. Multiple factors have made it necessary for this to be my designated
course of action· While the following explanation is not exhaustive, it highlights the most egregious actions that have led to my resignation.

Per the Council's Code of Ethics, the only agents that can hold any member of this body accountable for violating policy or procedure are the members of this body. Unfortunately, many times, both publicly and privately, members of this board have not taken action, even when faced with evidence of the need.

I submit the following to this board and to the public who will read this document, as it is a matter of public record:

Bernhard Capital Partners was initially brought to the City of Fayetteville through an introduction by then 1st term Mayor Mitch Colvin. Members of the Council and
members of PWC's board were present for this initial meeting. There was no further mention of Bernhard Capital Partners during the remainder of Mitch Colvin's 1st term as Mayor. Recently, the possible effects of this agreement and the lack of transparency surrounding this conversation have been a vast topic of concern in the community·

Shifting ahead to the inauguration of the 2019-2021 Fayetteville City Council, Mayor Steve Benjamin swore in Mayor Colvin. On the surface, this may seem inconsequential. However, when considered part of the big picture, it is an integral part of this discussion· On March 10th, 2020, Mayor Benjamin was announced as an addition to the Charleston Group ( owned by Attorney Johnathan Charleston) to their Public Finance practice.

He is also associated with Bernhard Capital Partners since at least 2015 https://dipresa.com.py/cmr36yx/3c6290-bernhard-capital-partners and at their 2020 annual meeting (https://www·bcp-2020-com) was a featured guest speaker. On page 8 of Institutional investing in Infrastructure (A Special Report published in conjunction with Bernhard Capital Partners), November 2020 Issue, Mayor Benjamin is also featured commenting regarding municipal revenues and public-private partnerships.

My priority on Council has been increasing the investment we were making in our infrastructure (stormwater, street resurfacing, and sidewalk installation.)

During my second term, I began getting calls about a "private equity firm" that may be looking into an arrangement with the City regarding the fund transfer dollars from PWC. Eventually, it came out that the Mayor had been in communication with BCP without the involvement of the Council and without; direction to engage them (inconsistent with Council Policy).

Once the concession agreement dialogue came before the Council, a few members of the body were clear that we expected equitable access to the information discussed regarding the agreement. During multiple closed sessions regarding the matter, a few other Council members and I continued to express concerns for the lack of clear communication across the Council. We could never gain the consensus of the collective Council to bring it under control·

Eventually, there was a closed session meeting with Bernhard Capital Partners, PWC's board, and the City Council to have some more detailed discussions. Allegedly Johnathan Charleston was present at the start of the meeting but left before the closed session discussion. This seems to present; a conflict, of interest, as Mr. Charleston serves as the Bond Council for the City of Fayetteville and Public Works Commission, Mr. Benjamin's employer, and Mayor Colvin's attorney. The overlap seems, at minimum, to present a conflict.

Currently, the Council stalled in the appointment of a PWC commissioner, which is relevant because, without the agreement of PWC, the City cannot arbitrarily accept Berhard Capital Partners concession agreement. The community should question the seeming allegiance to Mayor Colvin's agenda by Mayor ProTem Jensen, Councilman Haire,
Councilman Dawkins, Councilman Davis, and Councilman Wright.

Allegedly members of this Council are being lobbied by Johnathan Charleston for one of the applicants. This applicant was asked about a relationship with any member of the Council that could be considered a conflict of interest on his application and during an in-person interview. He denied any existed, however allegedly he has both a close relationship with Mr. Charleston (PWC's Bond Council) and an almost familial relationship with Councilman Chris Davis, who also serves as the liaison, appointed by the Mayor, between PWC and the City of Fayetteville.

Allegedly, the six members of the Council listed above have close communication with Mr· Charleston both professionally and personally. Mr. Charleston has provided legal counsel for at least three of the above. I have not heard allegations of influential familiarity with Attorney Charleston regarding Councilman Dawkins or Councilman Haire. They appear to have different motives that influence their synchronization with the Mayor's efforts.

Of note, the City has pending litigation regarding Dismass Charities, a transaction involving Attorney Charleston. The influence of Mr. Charleston on this body may help make the confusion surrounding this conversation make more sense·

Lastly, the Mayor has been accused of using his position and his influence to subvert the process established by the Fayetteville City Council. Some examples include:

The Fayetteville City Council should call for an immediate investigation into:

The City Council should move forward IMMEDIATELY with an independent review or these allegations and should require that Mayor Mitch Colvin and Councilman Chris Davis abstain from any vote regarding PWC's appointment or Bernhard Capital Partners, as there is the appearance there could be a conflict of interest or something to be gained financially.

In the case that the Council does not immediately investigate, the citizens of this City should begin calling (or an investigation on their own regarding corruption of members of the Fayetteville City Council by the State Bureau of lnvesti9ations (S.B.I.) or Federal Bureau od Investigations (F.B.I.), specifically regarding the Bernhard Capital Partners involvement in Fayetteville with the Mayor, Mitch Colvin, and the City and PWC's Bond Council, Johnathan Charleston as well as the alleged  destruction of public records by mayor Mitch Colvin.

Remember that Fayetteville is a Council/Manager form or government which means the Mayor only has one vote and does not determine the direction of the body. There should be more communication, more outward-facing transparency, and less blind compliance or members or the overall body. I am very disappointed in Mayor Colvin, Mayor ProTem Jensen, Councilman Wright, and   Councilman Davis because they have been dismissive of the process, critical of anything that seemingly opposed the Mayor's agenda and has refused to submit to a process review, choosing instead to ostracize those who believed it to be important. While the step I am taking to resign may seem drastic, it is imperative at this time.

Lastly, this Council should appoint someone to succeed me within 30 days or my resignation. Hold them to it.In the meantime, I am still just a phone call away and will continue to serve this community in whatever way God requires.

EDITOR'S NOTE: This is a developing story. For the most updated information, pick up our next issue of Up & Coming Weekly at our newsstands on November 17.