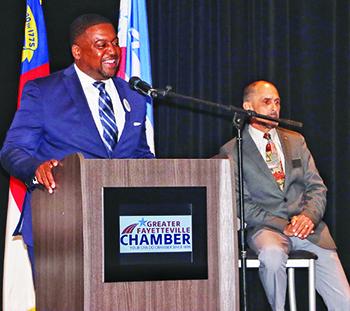 Candidates and incumbents for the Fayetteville City Council squared off in brief mayoral and council district debates on June 30, hoping to sway voters to their way of thinking.

The Greater Fayetteville Chamber of Commerce hosted the candidate forum at the Crown Coliseum Complex. The Fayetteville City Council and Mayoral election are on July 26. The election consists of a mayoral race and nine single-member districts.

The forum did not allow the approximate 60 audience members to understand how all members felt about any single topic since district candidates were asked different questions. Candidates who served in the military touted their leadership expertise, while those who owned or operated businesses touted their business acumen.

One emerging theme among those seeking office for the first time was that the current leadership was lacking. Incumbents mostly pointed to current city programs when asked about their accomplishments. Many candidates seeking their first terms promised more of everything, among them enticements to keep those getting out of the military and recent college graduates to stay in Fayetteville.

Mayor Mitch Colvin said the city is business-friendly and has demonstrated that through supporting small businesses, especially during the height of the pandemic, and forming partnerships to help businesses. He points to the more than 2,500 jobs created and $250 million in new investments.

Mayoral candidate Freddie de la Cruz said his focus would be on better mass transportation to help people get from their homes to work and back again. He advocated a more efficient way of getting to bus stops from homes, possibly using Lyft or Uber.

De la Cruz also criticized the city’s leadership response to the riots and the burning of the Market House.

“I didn’t like the way that was run,” he said. He said removing the “black painted stripe” around the Market House and then paying to repaint the street was an inefficient use of city resources. The Black Lives Matter issue surrounding the Market House was divisive, he said.

Colvin and de la Cruz also differed on their approach to finding a solution for the growing number of unhoused individuals in the city and the idea of term limits for the mayor and city council. Colvin noted the city is currently working on several programs to mitigate homelessness in the city, citing a proposed homeless shelter and other programs.

De la Cruz said much of the homelessness is a family matter and should be handled accordingly. He supports using public money for homeless centers for those who, because of mental illness or drug addiction, are not able to function without help. Others, who are capable of working, should be put back into the workforce, and that should be accomplished by bolstering the city’s economy, he said.

De la Cruz, a retired lieutenant colonel, said the mayor and city council offices should have term limits. He likened it to the Army’s change-of-command, where new leadership is infused often. Colvin, who has served as councilmember and mayor pro tem before becoming the city’s second African-American mayor in 2017, said the current two-year term works best. He was first elected to City Council in 2013.

“We have the shortest terms in the state, and we all run at the same time,” Colvin said. The city council and mayor all run for two-year terms and are not staggered.

“At any given time, there can be a complete turnover. Citizens decide every 24 months,” he said.

District 5 candidate Frederick LaChance, a Navy veteran and a graduate of the original Pine Forest High School, called for the removal of Fayetteville Police Chief Gina Hawkins. LaChance is running against long-time incumbent Johnny Dawkins Jr. LaChance also said his position is based on how the city, in his view, failed to respond to the riots and burning of the Market House. LaChance also endorsed combining city and county services.

Dawkins said he is a staunch proponent of a well-paid and well-equipped police department. He agreed with LaChance that some services should be combined and noted the Fayetteville Parks and Recreation services currently are a joint city-county venture.

The issue of race relations emerged in the debate between District 8 incumbent Courtney Banks-McLaughlin and downtown businessman Michael Pinkston. Pinkston previously ran for city council in 2015.

When asked about race being an issue in Fayetteville, Pinkston replied, “Race disturbs me deeply, but we need to get over ourselves.” He envisions a council that will discuss issues, not race, one that works on problems and votes for whatever is best for Fayetteville.

Pinkston said he supports the “Yes Fayetteville” initiative, which seeks to have at-large council representation, thus giving city voters more than two candidates to vote for. Currently, city residents can only vote for a mayor and their respective district representative. Adding at-large candidates would give city voters more voting options and, once elected, more council members responsive to that district.
Banks-McLaughlin told the primarily Black audience she was not in favor of the proposed “Yes Fayetteville” referendum, calling it racist and an attempt by some to achieve power and control over the city. Currently, eight of the 10-member council are Black.

Pinkston said voting in favor of having at-large council members would put us in league with other North Carolina cities like Raleigh and Durham.

Pinkston also said he supports the city’s previous pledge of $7.5 million for the proposed Civil War and Reconstruction Museum. Both the city and Cumberland County previously pledged $7.5 million each, with a county proviso that the committee behind the museum get other funding. The state of North Carolina has allocated $60 million for the project.
Banks-McLaughlin said she does not support the museum. She said there were more important issues in the community that the city could use the money for. Supporters of the museum have repeatedly noted the economic boon to Fayetteville in jobs and recurring tourist dollars once the history center is complete and under state control and operation.
District 4 incumbent D.J. Haire also supports single-member districts and does not support the proposed “Yes Fayetteville” referendum. Haire said the smaller single-member districts allow him to get to know his constituents better.

His opponent Thomas Greene asked, “What difference does it make?” Whether all single-member districts or some at-large districts, Greene said the issue is quality.

“Fayetteville has a leadership problem,” he said, maintaining that having the right people in place will make the difference.

Asked about the Murchison Road corridor, Greene said making residents along that route safe, enforcing building codes, and creating a better standard of living for those residents would do much to enhance that I-295 gateway into the city. Greene, a bail bondsman, said Fayetteville has a narco economy and a 50% increase in the murder rate. Working on those issues would greatly enhance Fayetteville’s image.

Haire countered that he had been a “drum major” for Murchison Road, citing the development of Bronco Square across from Fayetteville State University and securing $350,000 for supporting small businesses in the area. Haire so far has served 10 terms on the city council and is the second-generation owner of a real estate firm.

Others vying for office include incumbent Katherine Jensen and Jose Alex Rodriguez in District 1. Jensen, a small business owner, said people should shop locally and not travel to Raleigh or elsewhere to shop. Jensen listed her strengths as someone who collaborates with others to achieve results.

Rodriguez said Fayetteville needs to provide incentives to recruit big business to keep exiting military and college graduates to stay and seek careers here.
In District 2, incumbent Shakeyla Ingram hopes to ward off Tyrone Williams in an effort to keep her seat on the council. Williams is a former city council member. He resigned in May 2018 over ethical concerns. Ingram is looking to serve a second term and is an advocate of affordable housing, police accountability and the inclusion of the community in fighting crime.

“You can’t arrest your way out of everything,” she said.

Williams, an investor and developer who served on an economic development board in Norfolk, Va., said his family left their Raeford farm years ago to seek a better life in Fayetteville.

“It hasn’t turned out that way,” he said. He said development and the use of $40 million in American Rescue Plan money could encourage development in Fayetteville.

Mario “Be” Benavente and Antonio Jones are vying for the District 3 seat. Jones was appointed to the council in December 2021 to replace Councilwoman Tisha Waddell who resigned from the District 3 seat in November, alleging unethical behavior by several members of City Council.

Mario Benavente recently earned his law degree from North Carolina Central University and is a graduate of the Fayetteville Police Department’s Citizen Police Academy. Benavente claimed racial profiling by police at traffic stops has increased during the past 10 years. He said a citizen endorsed Civilian Review Board has yet to be established.
Jones is a certified military relocation realtor and refused to debate Benavente’s claim that he accepted dollars from an out-of-town super PAC.

“I’m not getting into mud,” he responded.

District 7 incumbent Larry Wright faces Brenda McNair who trailed Wright by only four votes in the primary. McNair is running on a platform of reconciliation. Third term Wright says his primary concern is reducing crime.
Finally, Fayetteville native Deno Hondros seeks to replace incumbent Yvonne Kinston. Hondros is a commercial realtor. He did not attend the forum because of a previous out-of-state commitment. Kinston is a telecommunications customer service representative and an officer in the Communications Workers of America Union.

For more detailed information about each candidate’s position, see Up & Coming Weekly’s 2022 Election Guide at www.upandcomingweekly.com.