City manager: Community will have input in police chief search 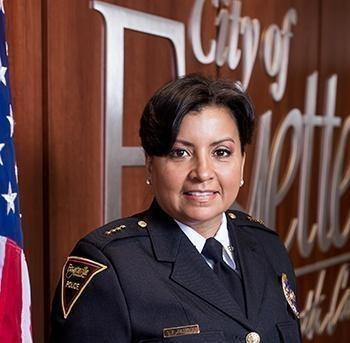 City Manager Doug Hewett said he plans to work with a recruiting firm as he looks to find a replacement for Police Chief Gina Hawkins, who announced last week that she intends to retire early next year.

Hewett said he also plans to get input from the community.

As the city manager, Hewett is responsible for hiring and firing the police chief.

“This doesn’t happen often, thankfully, that you’re having to replace a police chief or a position of this magnitude,” he said Friday. “I want to make sure that we do this right and that it’s not something that’s rushed. I appreciate people’s input, whether it’s good or bad. This is a professional process, and it takes time.”

Hawkins announced on July 15 that she plans to retire effective Jan. 17.

“I want to thank her, of course, for her time here in service to the city and for giving me, hopefully, enough time to do a thorough search,’’ Hewett said. A “comprehensive and nationwide search to find our next police chief.’’

He said the process starts with finding a recruiting firm that will help identify candidates and that will set out the process for selecting the next chief.

He said the city will have a structured process “to make sure that we notify as broadly as possible any candidates who are interested.’’

Councilman Johnny Dawkins said he expects Hewett to hire a consulting firm that will gather resumes and probably pick the top eight or 10 candidates for the post.

"And my hope is that we get someone who is a lawman or lawwoman very focused, very experienced, in dealing with gangs and drugs," he said. "Those are the two areas in our society that create a lot of crime."

Dawkins said he also hopes that Hewett will hire someone experienced in solving drug crimes and someone who has dealt with aggravated assault. Both, he added, are prevalent in Fayetteville, along with gang activity.

"Now it's much more violent," he said of the city. "Now there are so many guns."

Mayor Mitch Colvin said the council needs to be clear as to what the expectations are and that will help Hewett make a better decision.

"I have confidence that he understands that the City Council sets the policy for this hire,’’ Colvin said. “We'll have that conversation when we come back."

The City Council has primarily taken off the month of July and will begin meeting again in August.

Colvin said the next police chief needs to be someone who connects with the community.

"Basically, they need to be someone that is willing to connect with the community and not over police,’’ he said. “But they also have to understand the law enforcement side — the necessity to enforce the law and be a pragmatic person and understand the diversity of the community."

"Be community police orientated and the law enforcement component, as well, to enforce the law in our community to keep us safe," he continued. "Sometimes that's a difficult balance, but I know there are people capable of doing it. At the end of the day, what I'm looking for are the results of their efforts. I want to have some clear matrix to show there's progress being made."

He said he supports a national search but is not opposed to an in-house hire.

"You don't know what's out there if you don't look," he added.

Hewett said he is still trying to put his thoughts together as to what would be the best approach to take. A significant part of the recruitment will be identifying the skills and traits of the candidates. To do that, he said, he plans to have discussions with members of the Police Department, the City Council and the community.

He said that will help him prepare a recruitment profile.

Hewett said he also wants to spend time with Hawkins, the Police Department and the community describing where the city is when it comes to public safety.

“That way, anyone who is interested in applying, not only are they trying to sell themselves to us, but we’re also trying to sell our community to them,” Hewett said.

He said the city “will be looking for a leader who can take the recent success of our department and build upon it for the future while fostering a strong working relationship between the department, the city and the residents we serve.”

A decision to retire

In North Carolina, a police chief is eligible to retire after a half-decade, and Hawkins is already surpassing the five-year mark.

“The chief is not resigning; the chief is retiring,” Hewett said. “And when she was hired – she came to us from another state. How the retirement process works in the state of North Carolina is that you’re eligible to retire after you have served for five years.”

“I was not surprised that the chief chose to retire now,” Hewett said. “She has served our community for five years.”

When asked if Hawkins was retiring on her own or would otherwise be forced to step down, Hewett said: “That’s not any consideration that I had. That’s not even an adequate question.”

“This was her decision alone to retire, and I had no conversations with her about anything other than that,” he said.

Hawkins has come under fire by members of the community in recent years. She has been criticized for telling officers to stand down when protesters became violent and tried to burn down the Market House on May 30, 2020, following the death of George Floyd. An independent review of Hawkins’ handling of that situation by an organization called the Performance Evaluation Review Forum – or PERF — also found issues with morale in the Police Department and officers leaving in numbers higher than national averages.

The city has increased salaries for new officers and offered other incentives as it works to recruit officers.

Hewett said looking back at the tenure of chiefs since Tom McCarthy – who was chief when Hewett first came to Fayetteville in 2004 – they have almost all served five to six years before retirement.

“By the time Chief (Hawkins) retires in early 2023,” Hewett said, “she will have been with us for 5 ½ years. Just in Fayetteville, that seems to be the tenure.’’

Hewett said he “would love to keep folks as long as we can, but I definitely respect her decision to retire.“