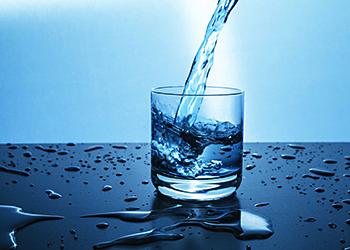 The N.C. Department of Environmental Quality shared information and answered questions about the new lower health advisory for GenX during a meeting July 26 at the Crown Theatre in Fayetteville.

The public turnout for the meeting about chemical pollution of drinking water was disappointingly low, according to some who attended.
The heads of DEQ’s water, air and waste management divisions took a tag-team approach to inform the audience and answer questions about the June 15 Environmental Protection Agency’s lower health advisory for GenX and other PFAS chemicals produced at the Chemours Fayetteville Works plant. Chemours is a chemical manufacturing facility located on the Cumberland/Bladen County line on N.C. 87.
DEQ staff discussed how the lower health advisory for GenX affects private drinking water wells. The EPA lowered the health advisory for GenX to 10 parts per trillion, down from the health goal of 140 ppt established by the North Carolina Department of Health & Human Services in 2018.

The EPA health advisory for GenX affects a current consent order requiring Chemours to provide a whole house filtration system or connection to public water for any homeowner whose well tested above the interim standard for GenX of 140 ppt.

The Department of Environmental Quality directed Chemours to revise its drinking water compliance requirements by taking into account the 10 ppt for GenX. According to the state, the newly released lower GenX levels will make about 1,700 more private wells eligible for whole-house filtration systems.

Chemours announced earlier this month that it is challenging the new health advisory for GenX.
Mike Watters, a vocal critic of how the state has responded to the chemical pollution, said the turnout was disappointing when compared with the number of people affected. Watters lives across the road from Chemours.

Watters estimated that about 105 people attended the information meeting. That did not include members of the Cumberland County legislative delegation, the Cumberland County Board of Commissioners, county staff and members of the DEQ delegation. The county’s public information staff recorded the meeting and will make the video available on the county’s website. It also will share the video with the DEQ, which will make it available on its website, according to Laura Leonard, public information officer for the DEQ Waste Management Division.

Greg McLean said there should have been more people attending. Both Watters and McLean were among a dozen who registered to speak after the hour-long information-laden presentation by DEQ environmental experts.

McLean owns a farm off Braxton Road with four of its five wells contaminated with GenX, a chemical produced in the manufacturing process by Chemours. He asked how he can get public water since he’s within 300 feet of an existing water line.
McLean also asked if the DEQ’s consent order requiring Chemours to continue sampling and providing filtration systems and other options for safe water for residents whose wells are contaminated will hold up since it challenged the recent EPA health advisory in court.

Sushma Mafemore, the DEQ’s assistant secretary for the environment, said the court challenge is between Chemours and the EPA. She said DEQ will continue to “vigorously enforce” the consent order.

The 2019 order requires Chemours to abate PFAS sources and contamination at the plant to prevent further contamination to air, soil, groundwater and surface waters, including:
•Sampling of private wells for PFAS and providing replacement drinking water supplies to impacted residents.
•Implementing multiple remedial strategies to significantly reduce Chemours’ PFAS discharges to the Cape Fear River.
•Installation of a thermal oxidizer and reduction of GenX air emissions facility-wide by 99.9%.
•Other compliance measures to characterize and reduce PFAS pollution leaving the Fayetteville Works site.

In August 2020, the state DEQ required additional actions by Chemours to prevent PFAS pollution from getting into the Cape Fear River. Those actions reduce by 90% the PFAS leaching into the Cape Fear River through groundwater from the residual contamination on the site. As of 2022, these additional requirements of the consent order are operating, and the design of a barrier wall and treatment system are under construction.

Floyd Waddle, who lives on Gainey Road, asked whether the state has tested the fish in area ponds, or the beef and pork that is produced in the affected areas. He also asked if there are studies regarding soil and crop contaminations. Panel members said N.C. State University is studying the effect of PFAS chemicals on soil and vegetation.
Stella King, a Cedar Creek Road resident, questioned the panel about how the meeting was advertised. A panel member said the meeting was advertised in two local newspapers and the Wilmington newspaper. Another audience member echoed her statements, saying he doesn’t read newspapers and only found out about the meeting 15 minutes before it started.

Mafemore assured audience members that chemical contamination in North Carolina’s water, air and soil is taken seriously by the department.

“It’s important to all of us. We don’t have all the answers yet,” she said, adding that her department has employees living in those contaminated areas.