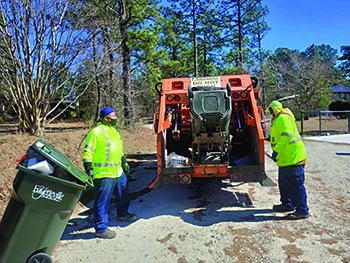 The Fayetteville City Council approved, by a vote of 8-1, recommendations to amend the city’s waste collection ordinance at the Jan. 9 council meeting. Changes to the ordinance include limiting the amount of trash, recycling, yard waste and limbs that can be collected from people’s homes each week.

The city will also no longer drive on private streets that are not regularly maintained and could damage city collection trucks. The city will determine a place to collect waste for those streets on a case-by-case basis.

The changes to the city’s ordinance do not include an increase in fees for taxpayers in Fayetteville. The City Council will decide on fee schedules during the budgeting process in June. Mayor Mitch Colvin was the only public official to oppose changes to the ordinance. Council member Kathy Jensen was not present at Monday’s meeting.

Now that the City Council has approved the recommendations to amend the ordinance, city staff will finalize the changes and start “a comprehensive education campaign about changes to ensure residents are aware and informed,” said Jodi Phelps, chief of staff for the city manager’s office, in an email.

The changes to the ordinance will not go into effect until after the education phase is complete, said Daniel Edwards, assistant director of public services for the city of Fayetteville and head of the city’s solid waste division, during a presentation to the City Council at Monday’s meeting.

Edwards said an exact date for when the changes will begin has not been decided. He said the changes could start as early as the new fiscal year, which begins on July 1, or as late as December.

The changed ordinance will put collection limitations on the following:

The city-provided rollout carts for trash collection are 96-gallon bins that are either green or brown. The recycling rollout carts are the same size, but are the color blue. Yard waste can be collected in various containers including bins and plastic bags. Fayetteville defines yard waste as leaves, pine straw and grass clippings, among other small yard waste.

The city defines limbs as tree trimmings, large shrubbery and large limbs that cannot fit in the city’s rollout carts. Previously, the city’s ordinance did not have consistent limitations on trash collection and limb collection was limited to 20 cubic yards. There were no limitations on recycling and yard waste collection. Edwards said the changes will put Fayetteville more in line with ordinances in other North Carolina cities such as Raleigh, Durham, Winston-Salem and Greensboro.

Mayor Pro Tem Johnny Dawkins said at Monday’s meeting that he was concerned about the new limitations on recycling.

“I don’t want to do anything to discourage recycling,” Dawkins said.

Edwards said that the one-cart limit on recycling is a contractual requirement required by the vendor that handles the recycling process for the city.

“As part of the contract that we have with waste management, that is we’re in charge of one cart per house,” Edwards said.

“We could come back to see if waste management or someone else would have some appetite to amend the contract,” Hewett said.

Colvin, who voted against the changes, asked if the Council was going to amend the recommendation to allow for more recycling. No such recommendation was made.

Raleigh, Durham, Winston-Salem and Greensboro allow for their residents to at least have two carts for recycling collection. Edwards said that if residents have any recycling over the one-cart limit, they can take it to the Ann Street landfill in Fayetteville for recycling. Recyclable materials can be taken to the landfill at no charge, according to the fee schedule from Cumberland County Waste Management, the entity that operates the Ann Street landfill.

The changes to the waste collection ordinance approved by the City Council Monday night also clarify where the city will not collect waste on private streets that are not well maintained and may damage city vehicles or harm city employees. According to the changed ordinance, which private streets that are considered unsafe for vehicles and employees will be determined by the solid waste division.

“Unpaved, has potholes, and literally as we’re driving along, we’re doing damage to the road and damage to our trucks,” Hewett said, describing the type of roads the ordinance would affect. He said the city has received complaints of city trucks damaging private roads.

The city will still collect on private streets that do not pose this risk, Hewett said.

“This is not the private roads that are well maintained. This is the ones which are, again, not safe for vehicular traffic,” Hewett said.