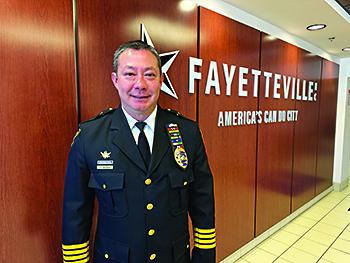 Kemberle Braden will take over as the next Police Chief of the Fayetteville Police Department. Current Chief Gina Hawkins is set to retire Jan. 31.
Braden has worked in the department for almost 27 years.

“I’m excited about the opportunity to be able to provide for the officers working on the side; the opportunity we have to really make a change of some of the things and how we proceed in the community,” Braden said.

Braden started out as a patrol officer in the field. In 2002, Braden was shot while investigating a tip about drug usage. Braden was shot at five times.
The hardest moment for Braden, in his entire career at the Fayetteville Police Department was coming back to the job following being shot.

“But probably the scariest, most anxious time I had was coming back to work because I had a lot of doubt in myself. There was a lot of [thinking about]whether I should do it, whether I can do it. It wasn’t that first day back, it wasn’t until several years down the road that you’d look back and say, okay, yeah, that was quite an accomplishment what I did there.”

Since then, he has risen through the ranks and is now the assistant police chief who supervises patrol operations and investigations.
When asked why he applied to the position of Police Chief, Braden says that partially it was a natural progression of the job, but mainly it was to have an influence on policies and changes within the community and the FPD.

“We always said, ‘if I was in charge, this is what I would do,’ you know, and that was part of the motivating factor along the way as well. I had the opportunity to see my plans or my ideas were good enough to really do the things that I thought that I would be able to do,” Braden said.

“And they weren’t always; sometimes I made mistakes and I had some failures along the way, but it was okay, and it sort of led me to where I’m sitting today.”

Going into the role, Braden says he has no specific goals or plans at the moment.

“I need to take some time and evaluate what is actually going on. I don’t want to rush into anything. I think I’ll get a better clear direction on where we need to go based on talking to individuals, both internally and externally. I think there’s some things that need to change internally within the department and get some feedback from the officers and the command staff, get their vision of what those changes could be,” Braden said.

Braden didn’t clarify what he meant by what things he wanted to change internally but did say that on the community relations side, he wants to continue having open houses and getting feedback from the community. He primarily wants to establish what the community’s expectations are for the police department.

“The best way to manage someone’s expectations is to know what those expectations are. You know, if I just go out there and say, ‘Hey, I'm giving you this.’ That’s not even on the list of your wants or needs, you’re never going to be satisfied with anything that I do,” Braden said.

Looking at Gina Hawkins’ term as Police Chief, Braden says he respects the way she handled the well-being of the officers and made it one of her priorities.

“I think she’s had a great emphasis and changed the police culture in regards to officer wellness. There’s been more efforts in officer wellness in the past couple of years than I’ve seen probably throughout my career. [Officers] have an opportunity to go seek counseling if that’s what the officer individual chooses to do or needs to do that, having that available to us as an option. I think many, many employees have taken advantage of that program. I think a lot of times we get so focused in on ‘what are we doing to address crime,’ we forget about the people that are actually the ones out there going to see the crime on a day-to-day basis. How we manage and deal with things that influence and affect us as individuals. We’re a sum of all of our experiences. You can’t just visually see trauma and pain on a day-to-day basis and not have an outlet for that,” Braden said.

For Braden, the focus for him is on retention, which focuses on the well-being of officers.
He says that if he can focus and solve some of the problems that people have, then recruiting becomes easy.

“I’ve got to figure out why people are leaving, why people aren’t sticking around, stay and do in their thirty years, treating this like a profession and working towards a career. If I can solve some of those problems, make people where they want to come to work, they enjoy the job, they want to be the professional officer, you know, and have that professional image and be part of something bigger than themselves,” he said.

Braden says he believes there are three things that tend to be successful in this career — confidence, competence and a little bit of charisma.

“If I can instill those three things, I think cops will go back to work if they’re confident that the department, their community, will have their back if they know they’re doing the right thing. If they have competence, they know what the law and the policy says. They know the difference in right and wrong. And like I said, if they can treat people with kindness and be a likable person, I think we’ll see a difference. And we see cops becoming motivated, and [they] get excited about the job again and want to stay and have a thirty-year career.”

Lt. Diana Holloway said that Braden is a “what you see is what you get” kind of man.

“He’s a straight shooter. It’s not sugarcoating anything. If he has it and he knows it, he’ll tell you. If he doesn’t, he’s like, ‘hey, we’ll figure it out. We’ll find out how to make it happen.’ So he’s honest, and whatever he says, it is what it is,” Holloway said.

Braden will assume the position on Feb. 1; however, an official swearing-in-ceremony has not been announced. Braden will be the 25th Fayetteville Police Chief.