THIS WEEK WITH MARGARET

The Windsors and Me

I confess to being among thebazillions of people around the globe who got up at all hours to watch the televised ill-fated wedding of Prince Charles and Lady Diana Spencer. It probably helped that I had a newborn, whether he tuned in with me or not.

I will not be able to watch the wedding of another Windsor, Charles’ son Prince William, and his lovely bride, Catherine Middleton, at the moment it occurs, but I have no doubt there will be plenty of opportunity to get my fill in the unavoidable 24/7 coverage of the occasion that has already been underway for weeks.

The Windsors were a part of our household when I was growing up.

I saw them frequently and viewed the Windsor children who were close to my age as my chums. Our mothers dressed us in much the same ways, and it seemed to me that we had common interests and experiences as Baby Boomer children growing up in the decades following World War II.

It really did not register with me that the Windsor children’s mother was Queen Elizabeth II of Great Britain and all its dominions, and mine was, well, my mother.

My father had been an Army medic in England, and he and another soldier boarded in the home of an English widow. My father, a personable and courtly southerner, struck up an acquaintance with the widow, Mrs. Fox, which endured until she died many years later. I suppose because the two young families, the Windsors and the Highsmiths, were in the same stage of life, she sent us many books about the British Royal Family.

I did not recognize this then, of course, but the books were well-crafted public relations efforts to portray the Royal Family as — almost — regular folks. Like similar books about the Kennedy family during the Camelot years, these books were fi lled with wonderful and charming family photographs. Some were formal portraits involving crowns, scepters and robes trimmed with ermine. Most, though, were family scenes, concocted I am now sure to garner and keep the affection of the Queen’s British subjects. We in America and elsewhere were just icing on the cake. The Queen’s son Charles, who much later would be humiliated when a recording surfaced of him expressing a wish to be in his mistress’ “trousers,” was actually a cute little boy and her daughter Anne had Shirley Temple-like yellow curls. They and their younger brothers were pictured swinging, playing with their dogs, and, occasionally, getting into some slight mischief.

I loved these books and remember once asking my father to write to Mrs. Fox requesting that she invite the Windsor children to visit us in Fayetteville. I imagined they would enjoy running around with the children and dogs in our Haymount neighborhood as much as my sister and I did, and they probably would have. Maybe they would even have gotten dirty.

Needless to say, they never showed.

There has been much water over the dam since then for the Windsors and the Highsmiths, but I still have a soft spot for the Windsors, and a special and enduring fondness for the Queen who reminds me of the mother I continue to miss 36 years later.

The Queen who will watch her grandson marry and make a commoner a princess has led a life none of us can begin to understand. It has been fi lled with luxuries, of course, but think about having to meet with Prime Ministers ranging from the Iron Lady, Margaret Thatcher, to the free-wheeling Tony Blair once a week, week in and week out whether she liked them or approved of their policies or not and without legal authority to affect anything they might do. All she can do is advise.

The Queen has remained unruffl ed and serene for more than half a century as she presided over everything from the fi nal dismantling of the once-global British Empire to the toe-sucking antics and infi delities of my long-ago imaginary playmates and their ever-wacky spouses.

Think of watching your empire shrink as the European Union took hold. Imagine what it felt like to see the monetary system adorned by your own face and those of your ancestors be eclipsed by the drab but convenient Euro.

Queen Elizabeth has done all this and more with dignity and a constant and unwavering hairdo that could have been styled at a downtown Fayetteville beauty parlor in 1965.

I have a favorite Queen Elizabeth story that pretty much sums her up, at least my vision of her.

It seems the Queen was out walking her beloved Corgis one day, her security 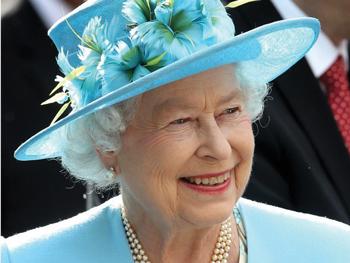 detail at a discrete English distance. One of her subjects approached and cluelessly observed, “My, you certainly look like the Queen.” To which Her Majesty, Elizabeth II, Queen of the United Kingdom and Defender of the Faith, replied serenely, “That’s reassuring.”

I hope the Queen thoroughly enjoys the latest Royal wedding celebrations and I wish the happy couple — and the Queen — a palace full of beautiful, bouncing and well-behaved baby Windsors.