This Week With Margaret 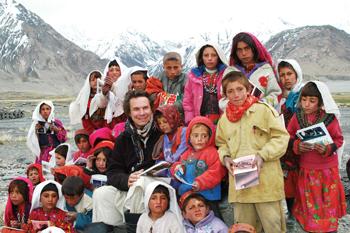 I was just getting into the CDs of Three Cups of Tea: One Man’s Mission to Promote Peace….One School at a Time by Greg Mortenson and his collaborator, journalist David O. Relin, when Mortenson tumbled unceremoniously off his lofty pedestal in the world of doing good.

In case you have not read — or in my case, listened to — this book, it is Mortenson’s account of how in 1993, after failing to climb the world’s second highest mountain, K2, on the border between China and Pakistan, he was nursed back to health and strength by the residents of a remote Pakistani village.

So bowled over was Mortenson by the villagers’ kindness, he says, that he built them a school and has devoted the years since to building other schools in both Pakistan and Afghanistan. All of this has brought him the praise and respect of the world, with talking heads everywhere commenting that this, not armed combat, is the better way to build nations and to make friends in places not our natural allies. Also coming to Mortenson has been lots and lots of money as generous hearts from every corner of the globe donated to his foundation, the Central Asia Institute or CAI, to build schools for people who would never set foot in one otherwise.

Mortenson’s sudden fall from near sainthood came last month after CBS’s long-running investigative news program 60 Minutes checked out Mortenson’s claims and alleged, sadly, that they just are not true.

No kindly villagers nursing this American back to health. No abduction by the wicked Taliban. Not as many operational schools as the CAI has said, and perhaps, most damaging of all, some slick and questionable accounting of CAI’s contributed resources.

I think most of us have an immediate gut reaction to stories like this of “Please, say it ain’t so!”

We want them to be true heroes, and we feel sad and betrayed when they turn out to be just like everyone else, imperfect human beings.

This desire is what makes us so cynical about people in public life, especially political life. Think the messy private lives of Thomas Jefferson, John Kennedy and Newt Gingrich; the ethical issues surrounding Tom DeLay; and the countless other elected ofﬁ cials who have not lived up to the trust others put into them.

How, we ask ourselves, can they publicly inspire us with lofty rhetoric about doing the right thing and then do the wrong thing in private?

And it is not just political ﬁgures.

The world of philanthropy is littered with people like Mortenson who often start out with the best of intentions but who somehow succumb to the temptation of all that money, either living high on the hog from it or sometimes just plain helping themselves to some. Government ofﬁcials fall into the expense account trap as well, as we have seen recently in our own community.

Yet when all is said and done, every positive thing that occurs in our world, every good deed accomplished, every wise decision is done by ﬂawed human beings, because there simply is no other kind. We cannot all be Johnny Appleseed or Mother Teresa but we can share with them our common and imperfect natures.

That being said, I did return the audio rendition of Three Cups of Tea to the library without listening to all of it. I am happy that some schools were built and that some children learned when they would not have otherwise. I just did not want to listen to all the hypocrisy and self-promotion that accompanied the good works.• • •

I have been writing for Up & Coming Weekly since 2001, since before Osama committed the worst domestic assault in our nation’s history. Shortly before July 4th of 2002, my column was an open letter to Osama, which concluded with this, “And rest assured, Osama, that whatever you may be doing on this American holiday, we have you in our thoughts and in our sights.”

Almost 10 years after that column, we did indeed get him, and some people are now asking for photographic conﬁ rmation of his death even though we have proof that cannot be faked, a DNA match.

My take on that is this: We all know certain things exist in this world, the John Edwards sex tape for example, but that does not mean that our government should show them to us