My Weapon of Choice

My weapon of choice — a garden hoe! One stands “ready” on the back porch of the farm cabin should a slithering visitor not be a friendly.Snakes in the country are a simple reality and are left alone to pursue rodents and other critters. The exception to the rule are copperheads and water moccasins that can take issue with you and then turn aggressive. I can remember killing a water moccasin with my bare hands (i.e. bare hands on the steering wheel as I repeatedly backed over the snake) that instead of crawling off insistently moved in to strike at the Jeep tires.

Living on a farm equips you with some basic “ﬁeld” rules: 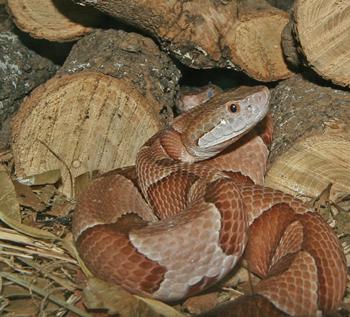 2. That is not your cell phone you hear “buzzing;”

3. If there is a piece of insulation or plywood lying in the ﬁeld lift it carefully;

4. Don’t poke your head in the pump house on hot summer days; and 5. Don’t leave doors open, and roll your car windows up — especially on rainy days.

As city dwellers, we don’t often anticipate an “up-close and personal contact” experience with poisonous snakes in our backyards but that is exactly what happened to the 8-year-old son of Brian Watson, the Farm Center’s manager.

Last weekend his two boys were outside playing in their Haymount neighborhood when Brian’s 10-year-old came running in to report a copperhead snake in the neighbor’s yard. The Watson family is outdoor “savvy” and the kids knew how to identify a poisonous snake. But by the time Brian got outside the 8-year-old had been struck.

A tourniquet was applied and Brian rushed his son to Highsmith to discover anti-venom was not available at the facility. Staff directed him to Cape Fear Valley where the critical anti-venom was administered. (Take note: Not all medical facilities have snake anti-venom available).

The bad news is Brian’s son reacted to the anti-venom and ended up in the ICU. The good news is that at last report he was snacking on gummy bears and is a hero to his classmates who are anxiously awaiting the tales of his adventures with his return to school.

I shared the copperhead story with a technician at my dentist’s ofﬁce who in turned told me a heartbreaking story about losing a beloved (and large) dog that had put itself between a snake and her 3-year-old daughter. She also lives in Haymount and advised there is an infestation of snakes near the little creeks that wind through the subdivisions.

It is spring and the snakes are crawling. Heads up as you start to water your lawns or walk near the lakes. The tornadoes have created a lot of debris and I have noticed as I walk through the neighborhood, snakes slithering back into the shelter of logs and branches that are piled along the street for removal. Just because we live in the city limits doesn’t mean we don’t share landscape with traditionally country cousins.

But also remember it is not true that the only good snake is a dead snake. Native Americans considered snakes the guardians of the Earth and in the chain of life they have a role in protecting us fragile humans.

Just keep your eyes open, respect territory and if something with a triangular shaped head starts to become menacing have a good long handled hoe at “the ready.”