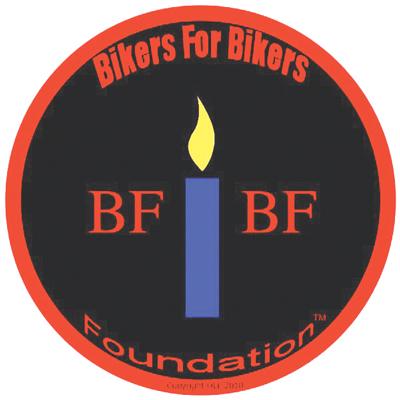 Bikers For Bikers Foundation (BFBF) is a nonprofit organization founded to help injured/sick bikers and needy children. Motorcyclists across America are known for hosting charitable benefits for people in need, supporting the families of fallen service members, doing toy runs for less fortunate children at Christmas, gathering food and coats for the homeless during the months before the bitter cold sets in, supporting breast-cancer campaigns, and doing poker run benefits for emergency situations when people have fallen ill or lost homes to fires and disasters. However, when was the last time you heard of a “biker” asking for help? It doesn’t happen very often.

In 2010 there were more than 10 million registered motorcycles in America. With an average of approximately 100,000 accidents recorded year-ly, there are approximately 90,000 injured, and 5,000 killed yearly accord-ing to the U.S. Department of Transportation statistics from 2000 to 2010. Motorcyclists are strong and often too proud to ask for help, but the numbers are staggering.

When Mickey, founder of BFBF and a North Carolinian, went down some years ago and broke an ankle he couldn’t get any help because he was “a biker.” He had kids to feed and clothe and basic bills like everyone else. He vowed that someday he would change that. After researching some of the larg-est charitable organizations in America, he was shocked by the percentages taken by large charities and how little of it actually goes to help those in need. Even more alarming was the fact that several of those charities have CEOs whose salaries are nearing the million dollar mark. The average is more than 50 percent and in some charities up to 99 percent of the money given actually goes to pay salaries, marketing expenses, buy office supplies and purchase and maintain corporate jets.

Bikers For Bikers Foundation is not a “big charity” or a household name — yet. It was started by a man who had a vision and one year of pocket-change. It is still a small, but rapidly growing organization with the goal of being known by every biker in America while keeping the operating cost to a minimum, so the money goes to help those in need instead of lin-ing the pockets of CEOs or employees. To date, everyone who works with the foundation volunteers, including the founder. The foundation is head-quartered in Cumberland County, and has members in 46 states, and state captains, who help raise funds in four states. BFBF is not affiliated in any way with Biker For Bikers, incorporated out of Texas, nor is it a club. The organization shares no one’s information.

If you ride, or have loved ones or friends who ride, this is one nonprofit you should take the time to visit their web-site, www.bikersforbikersfoundation.com, and show support for their cause.