Parting Is Such Sweet Sorrow

Like the original Grand Ol’ Opry house, to quote the late great singer, John Hartford, another piece of America has done gone on. The atomic wizards at the Pantex Nuclear Bomb Emporium in Texas recently dismantled the last B53 nuclear bomb. It is no more. It is deceased, like the dead parrot in the Monty Python sketch. The B53 was a bomb that Dr. Strangelove would have coveted and cherished. How should we love the B53? Let us count the ways. It was a Prince among nuclear weapons. A consummation devoutly to be wished. It was the Clint Eastwood of atomic death and destruction. The B53 was the biggest, baddest, bomb on the block. It was America’s largest nuke. Nobody dissed the B53. Our big bomb was born in 1962 weighing in at a svelte 10,000 pounds and was about the size of a mini-van or one half of Donald Trump’s ego. 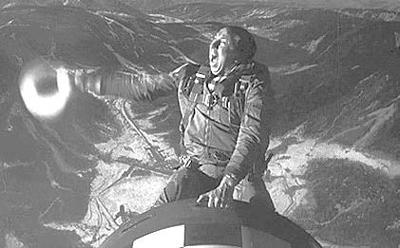 The B53 could do it all. It was 600 times more powerful than the bomb dropped on Hiroshima. Imported to a target by a B-52 bomber, the B53 was designed to blow up stuff buried way under ground. Recall the Russki’s Doom’s Day device in Dr. Strangelove. The only way to survive the Doom’s Day device was go live way underground. The elite government leaders and particularly attractive and fertile women were to go down into mine shafts for several centuries to live, work and procreate until it was safe to come out. The B53 could have been used to blast the Russkis deep in their mine shafts leaving only Americans surviving in our red, white and blue mine shafts. Using the B53, we could have won a nuclear war, if winning is deﬁ ned as wiping out the rest of the world. Our American government leaders would emerge from the depths of the Earth to once again reign supreme.

Deceased at the tender age of 49, the B53 bomb was loved by atomic apocalypse enthusiasts everywhere. Having outlived its creators, the B53 died after being dismantled while surrounded by its new friends and paid caretakers. The original wizards who invented the B53 had long since retired or died. They weren’t available to tell us which plugs to pull. The instruction book that came with the B53 when it was a brand new bouncing baby bomb had been misplaced over the years. The engineers who took it apart had to ﬁ gure out ways to euthanize the B53 without setting it off and causing a really large glowing hole in the Texas desert.

Coincidentally, a number of States are currently considering laws to establish that life begins at the moment of conception. At the other end of the spectrum of life and death, the Pantex plant had to decide when a B53 bomb is ofﬁ cially dead. The B53 bomb was declared dead after the removal of the 300 pounds of high explosives embracing the uranium pit which is the nuclear explosive material. The uranium pit is then stored for that sunny day when once again America will need to resurrect the world’s biggest nuclear weapon. The B53 died without ever getting to kill millions of people. Shiva and General Curtis LeMay would be so disappointed. It is the end of an era.

Speaking of the end of an era, where were you when you heard the riveting news that Kim Kardashian was divorcing NBA player Kris Humphries? Their marriage lasted only 72 days. Their divorce news is a moment that was seared in America’s collective psyche like the Kennedy assassination or the day that Herman Cain introduced Plan 999 from Outer Space.

No one saw a divorce coming between Kim and Kris. This marriage would last forever, or at least 73 days. Kim explained that sometimes, things just don’t work out. Maybe the alliteration of their ﬁ rst names was too much to bear. Maybe it was after the $18 million check cleared they received for the publication rights to their wedding orgy of good taste that they suddenly realized they had made a terrible matrimonial mistake. Somehow these kids are going to have to pick up their lives and start all over with nothing but an $18 million payment for a sham wedding to grubstake them in their attempt to live a quiet simple life. Kim explained they were still the best of friends but that she wanted to be able to spend more time with her cats.

Maybe we should have suspected the marriage might not last when the media reported that the wedding punch was made out of Prime Evil brand embalming ﬂ uid. Let us bid a fond farewell to the B53, Kim and Kris. We hardly knew ye.