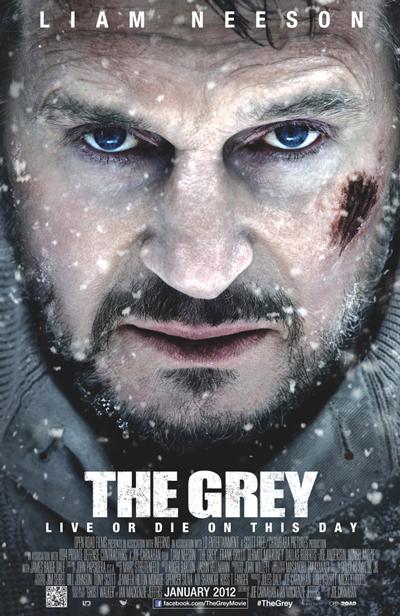 See, there’s this guy. He might seem like an ordinary guy, but then something happens, and he becomes a special agent/mercenary/special forces guy/survival-ist/MacGuyver/Superman. Related to this, he is a crack shot, does stuff with chewing gum and duct tape, and is always the last man standing. Like the modern day superhero he is supposed to be, this character typically has one major superpower. For example, in Kinsey, he played a character with a really big … brain. Alongside this superpower, he also has one major weakness. For example, in Unknown, he has amnesia. Well, if Joe Carnahan can pull off The A-Team, I guess he can pull this off too.

John Ottway (Neeson) is a sharpshooter working for an Alaskan drilling company, but he doesn’t really seem to enjoy his job or his co-workers very much. Or, at least this is what I am led to believe by his frequent use of the phrase “scum of the earth.” The job finished, he and the team of dirty, hairy guys prepare to fly out. But wait! They crash into the Andes Mountains and need to eat each other to survive!

Ok, that doesn’t happen. But there is a crashing-in-a-snow-storm scene that is easily as cool as the one in Alive. When he recovers from being slammed into the ground at a fantastic rate of speed, he finds his hat and checks around the flaming wreckage. By nightfall, he has alpha-maled the other survivors into a more or less cohesive pack. His pack includes Hendrick (Dallas Roberts), Diaz (Frank Grillo), and Talget (Dermot Mulroney), and a whole lot of red-shirt wearing can-non fodder.

The next morning, realizing that they crash landed in the hunting territory of a wolf pack, Ottway mobilizes his pack to get out of dodge. PSA: wolves are beauti-ful majestic creatures that should not be hunted or molested. When you crashland your noisy smelly plane into their home, soaking the earth with blood and gasoline, do not take their efforts to defend themselves personally. End PSA.

The group plans to hike to a nearby wood, and never thinks about the value of making snowshoes. Which will come back to haunt them in a big way, as they spend most of the movie sinking up to their hips in snowdrifts. The wolves track the group, trying to pick them off one at a time. This forces them to continue moving despite the fact (that Ottway should know) that if you are lost in the woods you are supposed to stay put until the rescuers find you. A nice wolf pack/human pack parallel develops, when some members of the human pack try to challenge Ottway, just as subordinate wolves try to challenge the alpha wolf. In both cases, the alpha wins pretty decisively.

I guess spending a few days starving out in the freezing cold and being chased by a wolfpack makes you stupid, because when the guys come across a deep ravine, they decide they are expert knot tiers and plan to jump the gorge by creating a rope from jackets and stuff. Does it count as a spoiler if I tell you that it doesn’t go according to plan?

As the men receive increasingly hilarious injuries, the film verges on cliché, with Ottway screaming into the sky in a search for God or something. It doesn’t fit the tone of the movie, and really does slow the film’s climax.

At this point in his career, you can pretty much write a Liam Neeson “man-with-a-certain-set-of-skills” action thriller with a homemade plot generator. Like all the rest, The Grey (117 minutes) is a moderately enjoyable addition to his already long, long, list of action-thrillers, and if you like Neeson, you will like this. Of course, some might complain about the ending. If it means that much to you, stick around for the final scene after the credits.