As baseball season approaches, the Swampdogs are busier than ever. Sure, they play a great game of baseball, but this local team offers so much more than nine innings and summertime refreshments.

When you buy a ticket to one of their games, you are uniting with an organization that is a powerhouse of goodwill and generosity in this community. Not only do they give to the community, but they’ve supplied the major league teams with a few players, too. The season opens on May 31, with the ﬁrst home game on June 1.

Just like last year, fans can expect something different at every game. A fan favorite in these tough economic times is the family four pack, which is four tickets and four meals for $30. There aren’t many places where you can bring the family out for an evening of entertainment and a meal for 30 bucks.

Every half-inning of every home game, there is an on-ﬁ eld promotion — so there is fan involvement on the ﬁ eld throughout the whole game. There is no lull in the action, whether it is the pie eating contest which gets two kids just covered in pie, or the toilet seat toss, which is like a big game of horse shoes, where folks are throwing toilet seats at a plunger to win a prize. The SwampDogs work hard to make sure the fans are actively engaged

To add to the excitement, every home game has a different theme. Some of the highlights are Striking Out Cancer night by Cape Fear Valley Health System in which the players wear one-of-a-kind pink jerseys that are auctioned off at the end of the game. All the proceeds go to The Friends of Cancer Center. There is also the 7th Annual Bobblehead giveaway presented by Lumbee River EMC. The ﬁrst 500 fans to the gate get a bobblehead of the SwampDogs’ mascot Fungo.

“There are people who collect these and can’t wait till next year to get the newest one,” said Aagard. “We’ve got 15 giveaways this season. You can come to the ballpark every home game and more than half of those night 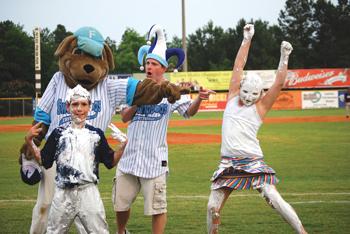 s you will probably come home with something as a give-away item.”

Summertime St. Paddy’s Day is back, too. Watch as the team turns the park green and gives all the players Irish surnames for the night. There is Irish music and a pint glass giveaway.

On Father’s Day, the ﬁrst 500 dads into the park will get a Bar-b-que gift set. The SwampDogs see it as a cool way to come hang out with dad at the ball park.

The Sandhills Senior High School Showcase gives graduated seniors from area high schools their last chance to play in front of the hometown crowd. The MVP of that game gets a $1000 scholarship, too. It is a night when the SwampDogs are actually away, but it is a really neat experience for the students who just graduated to play on a semi-pro ﬁ eld.

According to Aagard, one of the season high points is the Coastal Plain League (CPL) All-Star game. He says it is not unusual for CPL players to make it to the major leagues. This year, the SwampDogs are hosting the event on July 17 and 18.

“We just had another SwampDog who was a CPL All-Star in ‘05 make his major league debut — Andy Dirks. I think the biggest thing is that fans can come to the Swamp and there is a good chance they will see a future major leaguer — if not more than one — which is really, really cool to bring to Fayetteville,” said Aagard, adding that “According to Doug Peters, the president of Chamber of Commerce, the CPL All-star game could represent a $2 million economic impact on Fayetteville and the surrounding area. We are bringing people from all across the country to see their kids play. They’ll be spending money on hotel rooms, restaurants, gas station

s — there is going to be a huge inﬂ ux in the two-day span.”

There are plenty of other events this season that Aagard is excited about sharing with the fans, like the ﬁreworks shows. Look for another one to be added to this year’s calendar. That brings the number of games that end in a ﬁreworks display up to four over the course of the season. The shows will take place on June 4, July 3, July 18 and July 30.

“Last year we had more than 5,500 people here on July 3. I’m telling you it is the best ﬁ reworks extravaganza of the summer,” said Aagard. “It is phenomenal … it is just unbelievable that we continue to draw such large crowds. We really appreciate everyone coming out every year as it has continued to grow.

“We put all our effort into making sure we put on a good show and that the families are taken care of, and I guess it is just a bonus that we always have a good baseball game going on at the same time,” he added.

When it comes down to it, the SwampDogs are very serious about providing fantastic family-friendly entertainment, and making the community a better place while they do it.