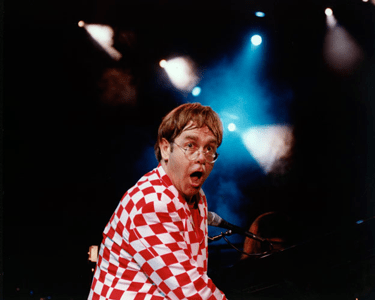 If royalty has ever visited our fair city, other than the Marquis de LaFayette, for whom the city is named after, we can’t find a record of it. So, it is with great excitement that Cumberland County residents are set to welcome not only a member of the British royalty, but also a member of rock-n-roll royalty: Sir Elton John.

John is well known, if you don’t know his face, you at least know and probably love at least one of his songs. He is one of the most highly acclaimed artists of all time holding five Grammys, a Grammy Legend Award, a Tony, an Oscar, induction into the Rock and Roll Hall of Fame and the Songwriter Hall of Fame, a knighthood from Her Majesty Queen Elizabeth of Great Britain and he holds the record for best-selling single of all time — just to name a few of his accomplishments. He has permanently and globally left his mark on music and he is coming to Fayetteville on March 11.

Sir Elton (as the international press have deemed him) was born in 1947 in Middlesex, England under the name Reginald Kenneth Dwight. He changed his name to Eton Hercules John in 1967. He demonstrated skill on the piano at the incredibly early age of 3 by picking out a popular song by ear. By 11, he had a junior scholarship to the Royal Academy of Music. His childhood was often restrictive, but with the support of his mother and stepfather, he began his music career at 15, playing piano at a local pub on the weekends. This gave him an outlet to play not only popular songs, but also those that he composed himself. His music caught the ear of people in the recording industry, and became a staff writer for Liberty records, routinely composing music for the lyrics written by Bernie Taupin. The pairing of John and Taupin created a beautiful partnership that still produces incredible music.

John’s first hit that rocketed him into success was “Your Song,” which was released in 1970 on the B-side of “Take Me to the Pilot.” It was extremely popular in the United States and in the United Kingdom, and in 1998, was inducted into the Grammy Hall of Fame. Since that very first hit, he has remained in the public’s eye — and ears. Just a few of his other popular works include “Can you Feel the Love Tonight” from The Lion King, Billy Elliot the Musical, ”Candle in the Wind” and “The Road to Eldorado.”

The March 11 concert is part of the All the Hits Tour. John and his band will perform classic and well-loved album tracks from throughout his career. The band includes incredible musicians familiar to Elton John fans: Davey Johnstone on guitars, mandolin, banjo and vocals. Matt Bissonette on bass guitar and vocals. Kim Bullard is on keyboards. John Mahon is on percussion, drums and vocals. Nigel Olsson is on drums and vocals. This concert is the perfect opportunity for longtime fans to experience all of their favorites and for new fans to experience the height of his entire five-decade career in a single evening.

Elton John will perform at the Crown Coliseum, located at 1960 Coliseum Dr., on March 11 at 8 p.m. Ticket prices vary, with tickets ranging from $50 to several hundred dollars. Tickets are available at ticketmaster.com or by phone at 800-745-3000 or at the Crown Box Office. The limit is 8 tickets per customer.