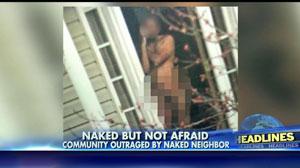 It is always something.

A Charlotte neighborhood has had a big dose of “something” for 10 years now in the form of a fellow named Gerard Leeper who is fond of parading around his house and pausing at his glass front door in the nude. News accounts of Leeper’s unusual habit feature photos of him standing behind his glass door yapping away on a cell phone — you guessed it — buck-naked. News outlets cover up several of his parts, of course, but there is plenty of body hair on display. Neighbors say Leeper has enjoyed being au natural in his yard as well, but so far no photos of such outdoor perambulations have surfaced. They add that this nude dude is often visible about the time the school buses let children out, but less so when the hubbies are out mowing their lawns.

Leeper’s neighbors have apparently enjoyed about as much of his behavior as they can stand and have called law enforcement repeatedly. They say Leeper’s behavior is totally inappropriate in a community that includes parents with toddlers in strollers and children playing outdoors. The problem is that Leeper’s raging free spirit has exposed — I am sorry, I could not help myself! — a problem in North Carolina law. It seems that exposing one’s whole self in public is a crime, but exposing oneself in one’s home is not addressed in statute. Chatting on the phone behind a clear glass door with no clothes on is apparently legal though on the outside of the glass it would not be.

I feel some legislation coming on. We could call it Leeper’s Law.

While I have never known a flasher or someone who likes to walk about in the nude — at least I do not know I know anyone like that, the Charlotte situation does remind me of two strange encounters I have had with Leeper-like nude practitioners.

Years ago, the Dicksons took a trip to New England with the three Precious Jewels and a teenaged cousin from Austria, all crammed into Station Wagon # 3 with a luggage turtle strapped atop. A highlight of the trip was a visit to long-time friends on Nantucket, where I had worked as a waitress during college summers. My then 9-year-old son had been in a serious car accident only days before our trip, and was enduring more than 350 stitches in his left arm, which made him understandably fretful. When he decided to take a walk down a lovely but almost empty beach one afternoon, I went with him. In the distance was a lone fisherman, and as we got closer we could see a rod and reel and a beer can in his hands, but my attention was really focused on my injured boy. Suddenly, my son stopped walking and hurled himself at my legs shrieking, “Don’t look, Mom!” I did, of course. There was the fisherman looking toward us wearing nothing but a baseball cap and a wicked grin!

Much later, during my first campaign for public office, my campaign manager and I were going door to door talking to voters in a neighborhood off Bragg Boulevard. It was near dusk on a fall afternoon when I knocked on the door of a house heavily shaded by trees and over grown bushes. Hearing nothing inside the house, I was about to slip my campaign literature inside the door when there was a little creak and the door opened just enough in the dim light for me to see the left side of a tall man wearing nothing but his birthday suit! No shorts! No towel! Nada!

Stunned, I turned my head and muttered something about arriving at an inconvenient moment. I more or less threw my campaign material at him and ran for my campaign manager who was a ways down the other side of the street. When I told Ronny, an experienced political operative and much more savvy than I at that point, about this male version of Lady Godiva, his eyes became round as saucers. Finally, he said, “Get in the car, Margaret. We are getting out of here.”

I can almost see Gilda/Roseanna rolling her eyes and wailing. “It’s always something!”

She might also say, as my father would, “It takes
all kinds.”