Look to the Skies, as the ASOM Hosts a National Airborne Day Celebration 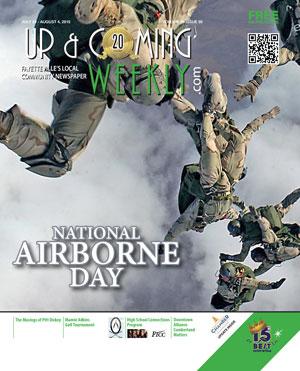 It takes a courageous and highly skilled person to jump out of a perfectly good airplane. Yet there is no shortage of paratroopers and special operators that do just that on a regular basis. Often that jump is just the beginning of a bigger mission, a piece in a complex training event or battle plan. Paratroopers falling from the skies over Cumberland and Hoke counties are routine these days, but that was not always the case. The airborne and special operations ties run deep here and the Airborne & Special Operations Museum celebrates the courage, accomplishments and can-do spirit of these service members every day, but there is one special day that gives the museum a reason to pull out all the stops and honor America’s airborne. The Airborne & Special Operations Museum Foundation is hosting National Airborne Day on Saturday, Aug. 15 from 10 a.m. – 1 p.m. at the Airborne & Special Operations Museum.

“National Airborne Day is a day declared by the President to celebrate the Airborne Forces and Special Operations Forces of the United States Army,” said David Myhres, narrator for the National Airborne Day celebration. “Some memorial stones are going to be dedicated to retired General James Lindsay.”

Myhres added that the retired general is the current president of the Airborne & Special Operations Museum Foundation, a legendary figure in the airborne community as commander of the XVIII Airborne Corps and the 82nd Airborne Division and first commander of the newly formed special operations command back in the ‘70s and ‘80s.

This year is the 75th anniversary of the Airborne and many fun activities have been planned. There will be a jump by the famous Golden Knights and a performance by the ever-popular and entertaining 82nd Airborne Division’s All-American Chorus. Attendees can enjoy layouts of weapons with Infantry soldiers and communication equipment and medical equipment will be on display. Don’t miss the World War II reenactments where the community can learn more about America’s finest hour. While there is plenty to see and do, this is a family-friendly event. Children will be able to see, hold and touch various pieces of equipment, ride the simulators and see informative movies. There will be soldiers on-site to answer questions that anyone may have.

“We are the Airborne Forces of the United States Army and we exit the aircraft over deniable territory to seize and hold objectives for fallen forces for the military,” said Myhres. “We are trained in Fort Benning, Ga., and do a three-week course and are either sent to the 82nd Airborne Division or other units that are Airborne qualified.”

Myhres added that you have to jump once every three months and perform your mission after you jump out of the aircraft to stay current.

During World War I, aviation technology was a game changer. There were significant advancements in several areas: aircraft, weapons, ordnance, instruments and even flight gear, including parachutes. The parachutes were not anything like what soldiers use as they drifted over Sicily and other local drop zones. The first parachutes were heavy and bulky and not something that could save a pilot in a crash much less an entire unit of paratroopers. In fact, the early military parachutes were designed for balloon observers who often had to jump from the observation baskets when they were attacked.

After World War I, the military continued to develop aviation technology as well as parachute technology. By the time war broke out in Europe in 1939, both the U.S. and Germany were working furiously to use the skies to their advantage in combat.

The first Airborne Infantry was the “Test Platoon,” who were the first to jump out of an airplane in 1940. It was composed of two officers and 48 enlisted soldiers who were selected from a pool of 200 volunteers based on high standards of health and fitness.

“The Army wanted proof of concept that we could actually jump out of the aircraft, land, and continue on with the mission without any injuries or anything else,” said Myhres. “That Test Platoon later grew into the 82nd Airborne Division and became one of the first Airborne Divisions.”