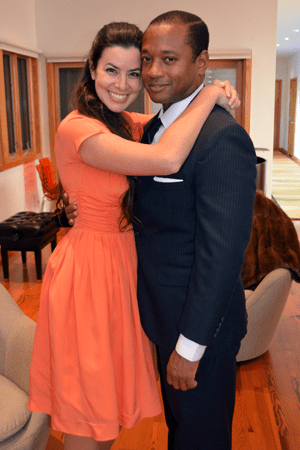 CFRT’s Artistic Director Tom Quaintance is always looking for ways to engage the community in meaningful conversation. Last season’s The Bluest Eye boldly shone a light on race and the many perspectives and cultural differences that communities, families and neighbors often grapple with. Director Kanisha Foster did such a great job with that production that Quaintance brought her back to direct Guess Who’s Coming to Dinner.

Foster brings a keen understanding of racial differences to the table. “My dad is black and my mom is white,” said Foster. “When my dad met my grandmother, she had never seen a black person before. So this is my family’s story. As an artist, so much of what I do is telling multicultural stories in an honest way.”

In a production with so much complexity, getting the right cast was important. With no shortage of talent in the Fayetteville theatre community, Foster is beyond pleased with the group dynamic and where the play is headed. Casting Perry in the role of Dr. John Prentice was an easy call. Foster worked with him before and knew he would be great for the part. “He is smart tenderhearted and can hold his own ground. We are thrilled to have him,” she said. “It is a bit of a difficult part to cast. There are so many overlapping parts of the personality of this character. It is not just a love story. The character lost his wife and child eight years ago and was set on never loving again. It is hard to find someone who can do that role successfully but Dwain is perfect for it.”

Lauren Mae Shafer plays the part of Joanna Drayton. Shafer is new to Fayetteville and is quickly finding a home onstage at CFRT. The connection between Joanna’s and her mother Christina Drayton (played by Raleigh native Linda Clark) is palpable and brings just the right intensity to the story. “Lauren and Lynda are perfect in these roles,” said Foster. “That is one of my favorite things to watch in the show — their connection.”

Backed by a solid cast, Foster is excited to tell this story and hopefully spark meaningful conversation about a topic that is just as relevant today as it was in the 1960s. To Foster this is not a play about horrible people who don’t accept a man into their home. It is more about two families who love their children and really want the best for them and are living in a world where they haven’t experienced anything like this before. “To me it is about change and how it happens,” said Foster. “And how people love their children. It is also about first times — first times meeting people and first times having experiences.”

Guess Who’s Coming to Dinner opens Oct. 29 and runs through Nov. 15. Information and tickets are available