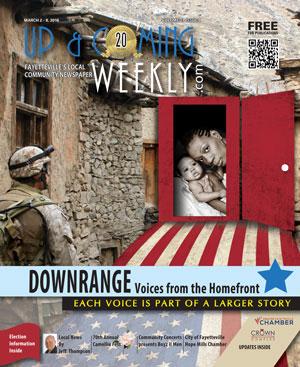 After a two-year journey, Cape Fear Regional Theatre’s Artistic Director Tom Quaintance brings Downrange Voices from the Homefront to the stage March 3 – 20. Downrange is one of the few original works CFRT has commissioned in its 53-year history.

“There is something we can do here to be better neighbors to these people going through these deployments,” Wallis Quaintance, an actress in the production, recently told an audience at a preview performance. She said that the play allows for open communication that can be part of the healing process for some.

CFRT received a national grant to support the development of the project and enlisted North Carolina playwright Mike Wiley, who used interactive workshops to collect stories of military spouses from Fort Bragg. The voices heard in those workshops were transcribed and transformed into a staged reading in May 2015, before becoming the current version of the play.

Nicky Hart was one of the voices brought into the project. Involved since the beginning, Hart, a former military spouse, is also a well-known local actress. She plays a role in Downrange, and said seeing some of her own story played out on stage has been a positive experience.

“The rehearsal process for this show has been a lot of work,” Hart said. “I remember the years, so many things keep coming back.” Having good and bad memories triggered has also helped in her own healing process, Hart said. She believes seeing the play can help others who might be coming to terms with their own experience. Hart hopes that sharing so much of her personal story will help other military spouses feel validated.

With Downrange Voices from the Homefront set for its world premiere, Quaintance said he is grateful for the production’s two-year journey.

“It was the most humbling and inspirational experience of my life,” Quaintance said. “A play that started out as an exploration of the impact of deployment on families became how 9/11 has redefined what it means to be a military spouse.”

Wiley, who also wrote The Parchman Hour, specializes in documentary theater, said Quaintance. For Downrange, Wiley delivers an accessible and funny play that is also gut-wrenching at times. The play follows couples from courtship to marriage and military life with deployments and struggles. Included are separations, reunions, heartbreak, mysteries of life in the military, and of course, love.

“We didn’t want to sugarcoat it… it gets difficult,” Quaintance said. “We deal with some difficult subject matter like loss and death. The range of things that families deal with is gigantic — we don’t deal with everything, but we deal with what we deal with in a way that is respectful and honest.”

“The heaviness of it comes from that feeling of responsibility to getting it right… telling it truthfully,” he said.

Quaintance is quick to dispel the notion that the play should be viewed as simply a show of support for military families that offers a hard dose of what military life and marriage is.

Downrange Voices from the Homefront will run March 3 - 20 with shows at 7:30 p.m. Wednesday through Saturday and 2 p.m. shows on Saturday and Sunday. Fayetteville Technical Community College will sponsor a Military Spouse Night on March 11 and Fort Bragg Credit Union will sponsor one on March 18. Both nights will offer $15 discount tickets, a reception and free onsite childcare for military couples.

On display during the run of the play will be artwork by Trish Brownlee, a local mixed media artist with a background in documentary photography. Brownlee served in the Air Force and Army as a photographer, and is a military spouse.

“The art is special not only because it is done by a former soldier,” Flom said. “But also, the material is made from military uniforms.” Part of Brownlee’s artwork is incorporated into the set for Downrange.

Brownlee’s technique of making paper from military uniforms is known as “Breaking Rag,” her initiative to use art as a tool for veteran advocacy in a community art project. A Breaking Rag demonstration/workshop with Brownlee is scheduled for March 12 at CFRT. The workshop is free and open to the public, but play tickets must be purchased through CFRT box office.