Downrange: Voices From the Homefront 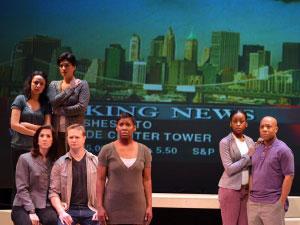 I first heard about the idea of Downrange: Voices From the Homefront  more than two years ago. Tom Quaintance, the Cape Fear Regional Theatre’s artistic director, had passed my name on to one of the volunteers who was working on setting up interviews to hear stories from military spouses. I was intrigued with the idea, but elected not to participate.

In my opinion, my story was not dynamic. It was simply the day-to-day life that military spouses live, punctuated with frequent deployments, long nights, upset children and walking around feeling like you are in this big thing all alone. What I missed is that is exactly what Quaintance and company were looking for. They were not looking for the Hollywood story — the happily ever after — but rather the true grit of day-to-day life when your spouse is on the frontline.

Fortunately, other military spouses took them up on the opportunity to tell their stories, and with more than two years poured into it, the CFRT has produced perhaps one of its best plays to date.

Downrange: Voices from the Homefront is a real look into the lives of military families — warts and all. It cracks the code on the sister — and brother — hood of military spouses. We aren’t a hard club to join, but it is very hard to retain your membership. No whiners allowed.

My friends and I often joke that like the movie A League of Their Own, there is no crying in our military spouse club. Crying doesn’t get the yard mowed or the oil changed in both vehicles. Whining doesn’t keep the flu away or help us juggle work, kids, household chores and the various other commitments that keep military spouses jumping. At least that’s what we tell ourselves.

In Voices from the Homefront, the CFRT lays open the quirks of our secret club. It lets those who have never been a member see what true strength looks like. It gives them a glimpse of what it takes to break us — and how quickly we bounce back. It puts those things that we choose not to share front and center, and in doing so, brings understanding from a community that thought they knew what went on in our heads and homes, but really didn’t have a clue.

The play, which was compiled from the interviews with military spouses by playwright Mike Wylie, flows seamlessly. We watch from the sidelines initially, how a young couple becomes one and then how that couple becomes one person holding it together while their spouse is deployed. I have to admit, I was worried about this play before I saw it.

I was afraid that the play would take on a “poor, pitiful me” approach when it came to military spouses. And, that’s the last thing we want. We made our choices when we married soldiers. We knew what we signed up for, and I didn’t want anyone to cast us in the role of victim. And they didn’t. The play masterfully and with a great deal of compassion tells the story of four military spouses and how deployments, and ultimately death, affects them. It draws you in. You can see the humor, the strength, the fear that lies behind every laugh, every joke, every heartbreak.

Actress Nicky Hart has walked the boards at the CFRT for many years. She has made us laugh until we cried, but in this show, she makes us cry until we laugh. Those who know Hart will see a master craftsman telling the story she knows best; turning herself inside out to do so. This may be her finest hour on the stage.

And, it might just possibly be one of the theatre’s finest hours. They took their time. They listened. They learned – and they produced a play that will make you laugh. It will make you uncomfortable. It will make you cry, and, just when you think you have nothing left, it will make you proud to live in a place like Fayetteville, North Carolina. A place peopled with  heroes — those who wear uniforms and their spouses who carry an invisible badge of courage.