Family Restaurant Brings a Taste of Vietnam to Fayetteville 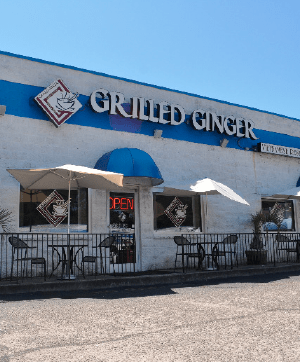 Grilled Ginger is an authentic Vietnamese restaurant nestled in a strip mall off Yadkin Road.

Owners Thanh Vo and his wife, Han Nguyen, were both born in Vietnam and immigrated to the United States. They first moved to California, where Vo was an engineering and computer science student before deciding to become a chef. Later, they moved to Fayetteville, where their two children, now ages five and two, were born. They opened Grilled Ginger a little over five years ago, and recently celebrated their five-year anniversary in May.

Lunch is usually more crowded than dinner, compliments of Fort Bragg, however, dinner consists usually more of families. Grilled Ginger is closed on Wednesdays for their day of rest. They prefer to have a day off in the middle of the week so they can take their children to appointments, and also because they usually get a large after church crowd on Sunday afternoons and evenings.

The restaurant’s name comes from the main ingredient in their food  — grilled ginger. The ginger is grilled very slowly before it is cooked and then added to the food.

According to Vo, who is the chef for Grilled Ginger, the most popular item on the menu is their soup, which they call ‘pho.’ Pho is a popular Vietnamese noodle soup, which can either contain seafood, chicken or beef, or a combination of those. Another popular item on the menu is the eggroll or spring roll. As per Nguyen, the reason their eggrolls and spring rolls are so popular is because everything is made completely fresh.

In addition to authentic Vietnamese cuisine, Grilled Ginger offers a selection of beer, and both red and white wines. They also serve smoothies and bubble tea.

Inside, the décor of Grilled Ginger exhibits the owner’s ties to Vietnam. Upon first walking in, there is an authentic Vietnamese red dress and hat on display. Adorning the walls are beautiful paintings, which were hand painted by Nguyen’s friend in Vietnam, and then shipped by boat to the United States. Two of the paintings are portraits painted of Nguyen and of her aunt.

The open concept of the restaurant, complimented by the warm colors of the walls and the friendly nature of the workers, creates a casual and relaxed dining atmosphere.

A neat aspect of Grilled Ginger is that it truly is a family affair. Nguyen’s aunt, Lien Sherman, owns the strip mall off Yadkin Road where Grilled Ginger is located. Sherman immigrated to the United States before Nguyen and Vo, where she met her military husband. She then was able to sponsor Nguyen when she immigrated. They expressed the deep desire to bring as many family members from Vietnam to the United States as possible.