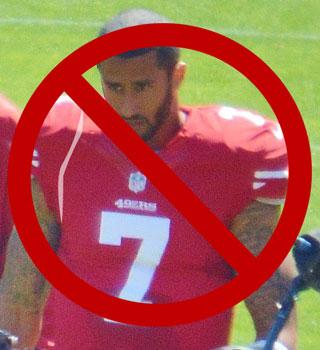 It makes no difference what your beef is: social injustice, political discourse, racial inequality, police brutality, Black Lives Matter — it doesn’t make any difference. When an NFL player takes a knee and disrespects the nation and flag, that cause, no matter how passionate, is instantly invalidated by such an ugly, un-American and unpatriotic gesture. Sort of like John Hinckley Jr. trying to justify shooting President Ronald Regan by saying he was in love and trying to impress Jodi Foster. Nobody bought that either.

I have never been a big football fan; however, I can’t help but be amazed at the way politics and self-serving righteousness has crept into the mighty world of NFL football.

It was probably just a matter of time before our national Monday and Sunday night pastime became politicized. All that was needed was the right catalyst, and that was provided by now-free-agent Colin (“Oh, please help me, J. Cole”) Kaepernick when he decided to “take a knee” for whatever reason during the playing of our nation’s national anthem. That was when he was employed by the San Francisco 49ers. Now, he’s unemployed and reduced to being nothing more than J. Cole’s dependent. Lesson learned, Mr. Kaepernick. Disrespecting your country was not a smart move, regardless of your feelings and stance on the First Amendment.

Nearly 75 percent of Americans interviewed felt Kaepernick’s actions were disrespectful, unpatriotic and asinine. Unfortunately, this situation could have been avoided if NFL management would have stepped in and taken control of its employees and the situation, but they chose not to. Of course, managing a team with players (employees) making salaries of 10,15 and $20 million a year could prove to be a little delicate and a mite difficult. No doubt it was, and the NFL opted out. As a result, disrespecting the flag and nation became the NFL players’ mantra, embraced for all the social/racial and political woes that ailed these mighty, mental midgets.

So, now it looks like the NFL, as a business and corporation, may be forced to “take a knee” of its own. Football fans, consumers and corporate sponsors are not happy about the situation. These constituents feel passionate that America’s value and virtue far exceed NFL player paychecks and personal social-political agendas. Yes, President Trump weighed in on the controversy, and that did intensify the situation. But, remember, Trump is a president without filters, and he speaks his mind.

Good or bad, like it or not, agree or disagree, once the words are out of his mouth, or once his tweet has left his Tweeter, it is what it is. The bell can’t be unrung. And, the fact that NFL TV ratings are down nearly 20 percent, tickets sales are off by double digits, ardent football fans are canceling their NFL cable packages and some are not only boycotting NFL purchases but are burning their NFL merchandise speaks volumes. Expect this decline to continue.

In the end, although they will try, NFL management, players and the political left will not be able to pin the blame for this situation on the president. This time, it’s the NFL versus America and the Star-Spangled Banner. I mean, who cares what J. Cole thinks or whether Colin Kaepernick ever gets a job or plays another day in an NFL uniform? He’s collateral damage. And, J. Cole’s boycott of the NFL only magnifies the hypocrisy of the entire situation and exposes and accentuates the lack of respect NFL management has for the players, their fans and the American people in general.

In conclusion, let me offer up a little advice to the NFL: fans are customers. And to be successful, you must keep customers happy by providing them a good product and great customer service. In return, you will gain their loyalty, their respect and their business. Become arrogant, demanding and self-righteous, and your customer base will deteriorate. In other words, pay attention to your fans. Don’t disrespect them. Their message is loud and clear: Respect the flag, the nation and the national anthem. Honor our veterans and active military and stop pampering and patronizing those who don’t know how to express and direct their feelings properly. Do these things and football will have a bright, peaceful and profitable future. Until then, America, support the new NFL: