Citizens. Not just 'voices of those in the background.' 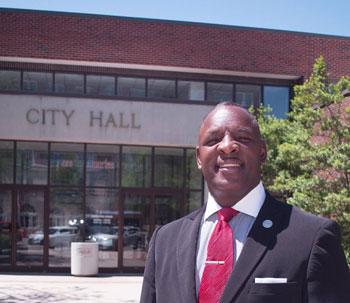 By the time you read this, the city of Fayetteville will have a vibrant new city council. Congratulations to everyone, especially Mayor Mitch Colvin and newcomers Johnny Dawkins of District 5, D.J. Haire of District 4, Tyrone Williams of District 2 and Tisha Waddell of District 3. Best wishes to all.

Honestly, I’m glad the installation is over. Or, was it an inauguration? Or coronation? Call it what you will, I just hope that everyone has settled down by now and will allow our new council to focus on the real issues that will move the city forward. I will admit I was quite surprised at the reactions of the public to the initial controversy over where to have the swearing-in ceremony. From the many interviews and conversations I had and phone calls and emails I received, the common thread of angst and frustration came from the discomfort of knowing this new council had its first controversy over something as simple as organizing and agreeing on the details of an event.

Equally unnerving was the perception that some council members seem to have little concern or respect for how the citizens felt about the issue. I think a lot of the unnecessary drama and controversy might have been avoided altogether had someone been able to tamp down the brazen, uncharacteristic bravado of District 7 Councilman Larry Wright, who basically suggested Fayetteville citizens should shut up and stop whining.

I’m not kidding. Wright’s attitude and uncharacteristic comments came across like fingernails on a chalkboard as he was trying to make a point to the well-seasoned and highly respected dean of the council, Bill Crisp. Wright told Crisp that it is always the nature of politics to attract and warrant criticism. Then, the good Rev. Wright doubled down with an outrageous statement; it reeked of pompousness and arrogance. “We (the council) cannot become submissive to the voices of those in the background.”

Wright went on to say that they, the elected city officials, deserve a nice, lavish celebration in return for all the time and effort they put into serving the residents of Fayetteville. Wright has now shown his true colors. And, it will be difficult for him to take back those sentiments. His conspicuous attitude of entitlement is indelible. I just hope it is not a sentiment held by other members of council.

Allowing common sense to prevail, he could apologize to his fellow council colleagues for including them in such selfish, thoughtless and outlandish comments. More importantly, he should apologize to the residents of District 7 and then to all the citizens of Fayetteville. Let me remind you that I am writing this four days before the swearing-in ceremony. If Councilman Wright did acquiesce and come through with a sincere and heartfelt apology during or after the ceremony, then it will be I who apologizes to him.

In the meantime, since local politics seems to attract its fair share of clergy, they must realize that politics is a calling of a different nature – a calling that does not entitle them to a love offering. The money they are spending and responsible for belongs to the citizens. One other message for Rev. Wright: we are not obligated to “honor” any elected official. Holding an elected office is a privilege and should not be considered just a supplemental source of income.

In conclusion, I want to congratulate Mayor Colvin on his decision to raise money from the private sector for the swearing-in ceremony. Who wouldn’t want to contribute to that fund? My check is on the way, Mitch. And, make no mistake about it, this is a time for celebration. It’s a time to allow citizens, family, friends and well-wishers an opportunity to congratulate, meet and greet Fayetteville’s new leadership. Gratitude need not be lavish or expensive. It only needs to be sincere.