Students on the edge of the abyss 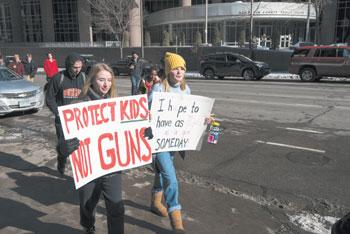 Watching teenagers on television peacefully protesting gun violence in schools and demanding school safety across our nation struck me as especially poignant and tremendously sad. In nearly two decades of formal education, I worried about teachers, grades, bullies, peer pressure and probably other issues I no longer remember. Not once in all those years did I ever worry about someone coming into my school or classroom to shoot my fellow students, my teachers or me.

That hideous possibility simply never occurred to me nor did anyone else suggest such a thing since Americans had not heard of or experienced such horror. It is profoundly shocking that today’s students fear for their physical safety in their schools. They have not only heard of such violence, thousands have experienced it and are taking to the streets and airwaves to express those fears and concerns.

The students are rightfully afraid for themselves and their friends, and teachers and are trying to effect social and political change, as is the right of every American. We do not know if or how their activism may affect American life and law nor how their newly found activism may affect them. Research shows benefits to being active in support of one’s beliefs.

Lisa Damour, a psychologist who has researched and written about girls, says civic engagement is good for young people. Damour recently discussed findings of contemporary research with CBS News, asserting that young people who participate in activism achieve higher levels of both education and income than those who do not. This is true no matter what their early grades may have been or their parents’ education levels, two markers that are often predictors of student achievement and earnings as adults. Activist students also have lower rates of depression than other students.

Damour stresses that research has not found exactly why students engaged in activism are higher achievers than less engaged students, but it may be because activism helps them develop social skills to carry them forward and plugs them into social networks they would not have encountered without their activist work. Such activities may also help young people see their own capabilities, helping them gain self-confidence and trust in their own opinions and strengths.

Activism at any age allows us to see future possibilities and to believe that we may have a hand in shaping a better world for ourselves and others. It confirms for us that the world is bigger than just our own small spheres and lets us know that we can affect the greater social good. Adolescence and young adulthood, at least in America, are notorious selfcentered periods of life – times when we concentrate on ourselves, our friends, our concerns, our cell phones. Social and political activism connects us to people we might never know in any other context and broadens our understanding of the world around us.

Oddly, at least to me, student activism is also associated with risk-taking behavior, including sedentary lifestyles, smoking and drinking. Again, research has yet to reveal why, but social and political change is a long, slow and deeply frustrating journey as people of all ages and all causes have found throughout history.

Students demanding safer schools may or may not see progress, which can come only through adult policy makers. They are, however, learning about themselves and about the ways of the world both fair and unfair, both of which will strengthen them as they move into adulthood and maturity.