Fayetteville Council: What end are you pursuing? 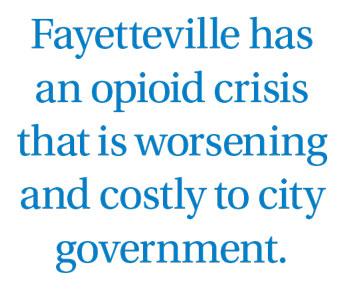 The Fayetteville City Council members must pause and decide, in the overall, what end they are pursuing. That is, as decisions are made regarding policy, budgeting, personnel and myriad other matters, what will be the overarching aim of all they do? I hold that the aim should be to govern this city in a fashion that serves the best interest of all citizens. More and more, council’s laser-like focus on ensuring diversity, even forcing it, disregards the best interest of the totality of Fayetteville citizens.

My contention that council is seriously digressing from serving the best interest of all Fayetteville citizens shows through in how the possibility of opioid litigation is being addressed. Without doubt, our city is in the midst of an opioid crisis. That fact is obvious in the following segments from a post on WRAL.com headlined “Fayetteville fights back: Radio stations host conversation on opioid crisis.”

“The Fayetteville area is 18th in the nation for opioid abuse. In 2015, emergency responders in Cumberland County administered 458 doses of Narcan, the drug designed to reverse opioid overdose. In 2017, that number nearly doubled. Fayetteville police administered the drug 14 times in 2015, and last year they administered 66 doses.”

Even further, the ever-increasing annual number of deaths from opioid use makes it clear that there is a horrendous problem across America. Tammy Grubb writes this in an article titled “Orange County joins growing push to make drug companies pay for opioid crisis.”

“Drug overdose is now the leading cause of death for Americans under age 50. Nationwide, more than 64,000 people died from opioid poisoning in 2016. In North Carolina, there were 1,518 deaths – 90 percent more than in 1999. Half died from commonly prescribed medications, state reports show.”

Given the cost to governmental entities of addressing this situation, some states decided to bring lawsuits against various drug makers and distributors. An article by Wesley Young headlined “Winston- Salem joins lawsuit against opioid manufacturers” summarizes the basis for these lawsuits.

“The premise of the lawsuit, as stated in the city’s resolution approving the action, is that opioid manufacturing and distributing companies may have violated state and federal laws that are designed to prevent the diversion of prescribed medication into the illegal drug market.”

As the number of lawsuits increased, it became apparent that an efficient and effective arrangement for addressing the expanding number of cases was required. In an article titled “Can This Judge Solve the Opioid Crisis?” Jan Hoffman explains how this need was addressed:

“In December, a judicial panel gathered all the prescription opioid cases filed in federal court across the country and plopped them into Judge Polster’s lap. The consolidation of large numbers of similar cases is called a multidistrict litigation, or MDL; it’s usually done to enhance efficiency and reduce costs.

“The panel cited several reasons for selecting Judge Polster. Ohio has been hard-hit by the crisis and is also centrally located to the defendants. And Judge Polster has MDL experience. He mediated settlements in some 700 cases involving a medical contrast dye.

“This type of litigation is inherently unconventional, but the consolidated opioid lawsuits may be even more complex than most.”

Beyond the action reported in the Hoffman article, note the statement made regarding the complexity of these lawsuits. Also, the judge referred to is Judge Dan Aaron Polster of the Northern District of Ohio.

After the MDL was put in place, Polster provided guidelines for how the litigation would proceed. He was clear in saying that he would not hear from every attorney representing a client. The result was the formation of a consortium of these attorneys with defined rules and responsibilities. The organization approved by Polster is detailed in Case: 1:17-md-02804- DAP Doc #: 37 Filed: 01/04/18 1 of 1. Page ID #: 362.

That organization calls for three counsel co-leads, co-liaisons, an executive committee and steering committees. Concerning co-lead counsel, the approved petition says, “Lead Counsel is charged with formulating (in consultation with other counsel) and presenting positions on substantive and procedural issues during the litigation.” The petition also includes biographical information on attorneys who are filling all the positions except on steering committees. A review of that biographical information provides a very good feel for the high level of expertise and experience among those attorneys driving this effort.

At present, there are some 400 plaintiffs in this case. During a conversation with attorneys Billy Richardson and Keischa Lovelace of the Richardson Firm in Fayetteville, they explained that this is not a class-action lawsuit where any person or entity can, based on having a similar grievance, join the lawsuit. In this case, the consortium decides who joins. The process is that an interested party may request representation by the consortium or engage local counsel. If local counsel is engaged, that attorney must be acceptable to the consortium. Upon acceptance, a contract is signed with the consortium. In the event local counsel is not found acceptable, the plaintiff is not allowed to join the lawsuit. The selected counsel would then have to pursue the case independently and absorb the financial cost of doing so. The plaintiff could engage another attorney.

The consortium arrangement is that attorneys work on a contingency basis. Plaintiffs pay nothing for being part of the lawsuit. Attorneys involved will, under their agreement, divide 25 percent of any settlement, with the remainder going to plaintiffs.

Polster has been clear in saying he wants settlement of this case expedited. In fact, there are reports indicating some settlement discussions have already started.

At the bottom line: Fayetteville has an opioid crisis that is worsening and costly to city government; a well-organized lawsuit is underway. It is a complex case requiring experienced attorneys with proven records in this kind of litigation. This is expensive litigation that is conducted on a contingency basis; attorneys must be able to financially meet the demands of this process. Time for joining as a plaintiff is quickly expiring.

According to City Attorney Karen McDonald, the city of Fayetteville was approached by two local attorneys and invited/encouraged to join as a plaintiff in the litigation being conducted by the consortium. The first offer was presented to McDonald by attorney Terry Hutchens. Fully understanding the tremendous positive possibilities in signing on as a plaintiff, and having not been approached by any other firms, she discussed this offer with city council. Based on council’s consensus, McDonald engaged Hutchens’ firm to represent the city of Fayetteville.

Later, McDonald was approached by State Rep. Billy Richardson, D-Cumberland, who, in his capacity as an attorney, offered/encouraged having Fayetteville join the lawsuit as a plaintiff. Given that McDonald had already committed to Hutchens, she suggested that Richardson talk with him. In my conversation with Richardson, he confirmed that he did call Hutchens and they agreed to work together. A contract with the city was finalized, and the process was moving ahead.

As has been widely reported, Mayor Mitch Colvin then sent an email to McDonald, the city manager and members of council, indicating the action taken by McDonald was “unacceptable” because she used a “no bid” process. The city attorney has repeatedly stated that solicitation of bids is not required for legal services. I have not seen nor heard any contradiction of that assertion. The heart of the matter for Colvin is his contention that, under the city’s policy of seeking the inclusion of local and minority businesses when contracting, this service requirement should have been opened for bids. He put the item on the agenda for reconsideration at council’s March 5 work session.

In that meeting, Colvin made his minority inclusion case. There were several comments that deserve summarizing as follows: Councilman Crisp – The matter was settled by consensus in a February work session. Given that the city is not expending funds, this contract is below the $30,000 threshold requiring bids; Mayor Pro Tem Mohn – The city attorney has always had authority to select law firms in legal matters; Councilwoman Waddell – Could a firm approach Hutchens/Richardson and ask to work with them? Yes.

In the end, the consensus was to withdraw from the agreement with Hutchens/Richardson, and within a 15-day period, do a Request for Interest, or RFI. That means firms will have an opportunity to submit information that will allow them to be considered to represent the city in this matter. A committee of council members will review submissions and select a firm. This process moves the selection decision from a trained lawyer who has, for 16 years, served, I believe, with distinction as city attorney. Even further, she understands the caliber of firm required for this task and that there is no guarantee the firm selected by this RFI process will be acceptable to the consortium. Mohn and Councilwoman Tisha Waddell voted in opposition to this action. Councilwoman Kathy Jensen had departed when this matter was addressed. Colvin and remaining council members voted in favor of the course change.

Sadly, given that the litigation is moving quickly and there is no guarantee that the consortium will accept a firm selected by council, Fayetteville might miss this opportunity to recoup funds already expended because of this crisis. There is also the possibility of a monetary award due to projected future expenses. Given the tremendous risk associated with the course chosen by council, this action is definitely not in the best interest of all Fayetteville citizens.