Poor timing: Why four-year terms are a bad idea 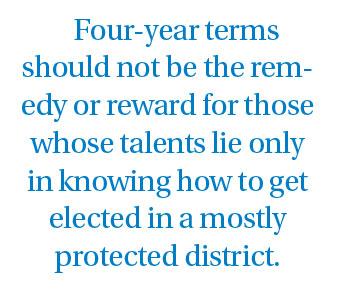 Come on, folks! Four years terms for our elected officials? Are you kidding? Is this community so sadistic and hellbent on fulfilling that predetermined and haunting conclusion that Fayetteville and Cumberland County will always find a way to rip defeat from the jaws of victory?

No doubt Fayetteville is experiencing a growth spurt stimulated by the new $38 million baseball stadium and the Houston Astros’ 30-year commitment to play ball in the city. Currently, we have about $100 million of new economic development in downtown Fayetteville. This is a good thing, but the prevailing question in the minds of many residents is “does this community have the dedicated, intelligent and business-savvy leadership capable of managing growth of this magnitude?” Many think not.

And this comes on the heels of the unfortunate situation Fayetteville just endured with ex-District 2 Councilman Tyrone Williams. Williams resigned his position several weeks ago in disgrace after the city council voted to start the process to officially remove him from office for perceived ethics violations that took place within weeks of his tenure.

Many city and county residents feel this situation demonstrates the prevalence and permeation of the problem of having unqualified and incompetent people in leadership at municipal and county government levels. Political correctness and apathy are major disincentives for nurturing good, honest and well-educated people to seek offices of leadership.

If our community is to move forward and achieve social, cultural and economic stability on par with our North Carolina counterparts, we must find a way to encourage strong and capable citizens to step forward to serve this community while discouraging those opportunists who only intend to park themselves in those positions for convenience and prestige and to enjoy a source of supplemental income.

These posers are easy to identify. They contribute little or nothing by way of innovative thought or vision while mastering only the art of getting elected. Anyone who attends Fayetteville City Council or Cumberland County Commissioners meetings on a regular basis or watches them on TV can easily identify these governmental freeloaders. Here are the three of the most common and conspicuous signs:

1. They lack intellectual capacity, which makes them appear confused on the simplest matters, rendering them helpless to reasonably evaluate the magnitude of situations affecting the city and county.

2. They have an impulsive and constant need to grandstand for the gallery or TV cameras. This manifests itself in the asking of dumb and irrelevant questions while elaborating on Mr. Obvious-style observations. This kind of conspicuous behavior wastes time and serves as a motivated diversion to cover up the fact that:

3. They have shown up unaware of priorities and unprepared for the meeting. This is obvious to the informed public and even more obvious, distressing and annoying to those commissioners and councilmen trying to rightfully serve their constituents. The most frequent and recurring complaint we hear is “…they just don’t read their packets.” Packets refer to the information provided to them in advance of the meeting about the topics and details of what is going to be covered in that meeting. They receive these packets so they can be informed of the issues and business of government.

Four-year terms should not be the remedy or reward for those whose talents lie only in knowing how to get elected in a mostly protected district. Nor should this kind of behavior go unchallenged or be accepted by constituents. Two-year terms are plenty long enough to learn proper policies and procedures of our local government.

I’ll close with these related thoughts and warnings of sorts: Political correctness inhibits free speech and restricts our right to free expression. This is what gave us Tyrone Williams. There was no vetting. Way too many people, including prominent, well-positioned citizens, knew of Williams’ character (or lack thereof), his reputation and dubious business dealings. Yet, no one came forward.

Additionally, our entire community should always be skeptical of people who show up on the political scene seeking office without any previous community involvement, voice, presence or involvement in the process of government. At some point, we need to ask why and not be afraid of the answer or consequence.

The answer needs to be much more substantial than “it’s a white district” or “it’s a black district” or whether it’s a Democrat or Republican seat, or “wow, I could use the money.”

If our elected officials don’t have these qualities or can’t prove their worth in two years, they will not be able to do it in four years. Let’s be realistic and practical in this decision.

Let the people decide. In the meantime, think about this: What cost- or tax-saving measures have been introduced or initiated during the last two years?

Thanks for reading Up & Coming Weekly