Why many Christians support President Trump 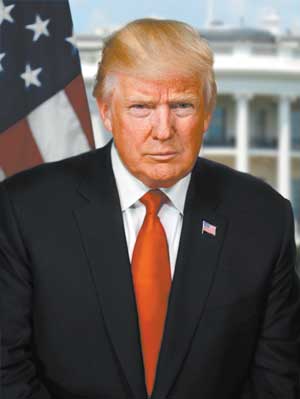 Do an internet search for “Christian support of Trump” and you will see a multitude of articles that roundly condemn Christians who supported him during the election and those who currently support this president. I did not find a single article that addressed the subject without a tone reflecting denunciation of these supporters. These articles appear driven by the fact that 81 percent of white evangelical voters voted for Donald Trump.

My reading of these articles and hearing comments of agreement from various individuals leads me to a troubling conclusion. That is, these people apparently think that being Christian, being in a faith relationship with God through Jesus Christ, requires one to take on a condition of total stupidity. The English Oxford Living Dictionaries define stupidity as “behavior that shows a lack of good sense or judgement.” Given that being Christian does not require believers to be stupid, allow me to share some thoughts regarding why I think many Christians support President Trump.

The argument put forth is that because of Trump’s alleged and actual “moral transgressions,” Christians who support him are guilty of hypocrisy. Elizabeth Bruenig writes the following in an opinion piece titled “Evangelicals’ support for Trump will cost them – spiritually” She says, “On the one hand, church going white evangelicals are among Trump’s most loyal supporters. On the other, there’s simply no way to square the way the president lives with the cultural vision these Christians seem to share.”

The statement above by Bruenig, which reflects the argument made by many, calls for what I see as an unrealistic approach to Christians helping make the world what God would have it be. They would have us not work with, not support, people whose alleged, or even actual, past moral conduct does not align with the standards of Scripture. They want that rule followed even when doing so dramatically adversely impacts the nation and moving the country toward what God would have it become.

This is like saying to a dying person, “This doctor has a treatment that will save your life, but, because of his alleged, or actual, moral failings, you should not allow him to treat you.” This is the situation faced by Christians in America.

In 2016, we were clearly a nation on a self-destructive course. We were presented with choosing between Hillary Clinton and Trump for president. In my estimation, on the one hand was a candidate who was not without her own questionable conduct and would keep America on this self-destructive course, maybe hastening that destruction. On the other hand was a candidate who came with allegations of, and some actual, moral failings but put forth an agenda that could correct our course and, in great part, do so by allowing Christians to again fully and freely, in America, practice our faith.

Without doubt, Christians came to the 2016 presidential election knowing that our faith, our very existence, is under attack in our own country. Consider the following paragraphs from the article “Regular Christians Are No Longer Welcome in American Culture” by Mary Eberstadt. “Traditional American Christians have long been on the losing end of culture-war contests – on school prayer, same-sex marriage and other issues. But recent events, including the Supreme Court decision overruling Texas’ restrictions on abortion clinics and the mandate that employers provide access to contraception, have added to the sense that religious expression is under attack.“

This new vigorous secularism has catapulted mockery of Christianity and other forms of religious traditionalism into the mainstream and set a new low for what counts as civil criticism of people’s most-cherished beliefs. In some precincts, the ‘faith of our fathers’ is controversial as never before.“

Some of the faithful have paid unexpected prices for their beliefs lately: the teacher in New Jersey suspended for giving a student a Bible; the football coach in Washington placed on leave for saying a prayer on the field at the end of a game; the fire chief in Atlanta fired for self-publishing a book defending Christian moral teaching; the Marine court-martialed for pasting a Bible verse above her desk; and other examples of the new intolerance. Anti-Christian activists hurl smears like ‘bigot’ and ‘hater’ at Americans who hold traditional beliefs about marriage and accuse anti-abortion Christians of waging a supposed ‘war on women.’”

Not being lured into a state of stupidity by others’ claims regarding the requirements of our faith, many Christians considered the destructive course being followed by our nation and the growing suppression of Christian views in America. Presented with a candidate whose alleged, and even actual, moral failings were and are emphasized by media and his very vocal opponents, many Christians considered the totality of Trump in light of the state of America overall and the growing suppression of Christianity in our country. In the end, he won substantial support from this group.

I expect the attacks on Christians who support this president will increase and grow even viler if his exemplary record of accomplishments over the first 16 months of his administration continues into the future.

Despite Democratic obstruction at every possible opportunity, media coverage overwhelmingly focused on real and imagined negative occurrences involving him or those in his administration, and the extremely questionable appointment of a special counsel who seems to be searching for a crime instead of investigating one that has been identified, Trump is delivering on his promises.

Among his campaign promises was that he would protect the rights of people of faith. That promise was clearly stated when Trump spoke at the 2017 Liberty University Commencement. In an article titled “Trump promises to protect Christians at Liberty commencement speech, ”Lauren Markoe quoted the president. “‘America is better when people put their faith into action,’ Trump continued. ‘As long as I am your president no one is ever going to stop you from practicing your faith or from preaching what’s in your heart. We will always stand up for the right of all Americans to pray to God and to follow his teachings.’”

The Markoe article also reported comments made during that ceremony by Jerry Falwell Jr., president of Liberty. “‘Since his election I’ve noticed a new hope and a new optimism sweeping this country,’ Falwell said. He said he appreciated Trump’s support for the state of Israel, appointment of ‘a pro-life justice’ to the Supreme Court, and bombing of militants in the Middle East.”

As I do the kind of assessment detailed above, if the situation were not so dire, I would see these attacks on Christians for supporting Trump as laughable. The glaring hypocrisy is that these critics call on us to, based on their claims regarding the requirements of our faith, condemn and separate from the president; however, when we, based on that same faith, oppose same-sex marriage, abortion and other agenda items dear to that group, we are verbally attacked and our voices suppressed.

In the midst of this overwhelming pressure, rejection and condemnation, we (Christians) must remember that our faith does not require that we be stupid.

That statement is not intended to say that Christians or others who do not support Donald Trump are stupid. My message is that many Christians refused to be, and none of us should allow ourselves to be bullied into political behavior that “shows a lack of good sense or judgement.”