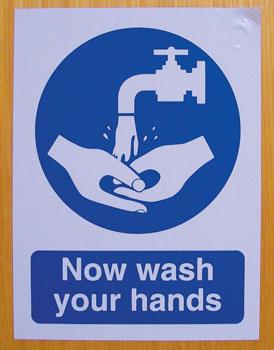 This column is dedicated to a very special guy who works somewhere in the food service industry. I speak of Leon, an unknown folk hero who deserves recognition. I have never met Leon, but I feel I know him anyway. Leon, like Johnny Yuma, is a rebel. Leon is unafraid to buck society’s norms. He’s the kind of guy who made America great once upon a time. Leon is a rugged individualist willing to stand up against the job-killing regulations of the Deep State, which we all know stifle American ingenuity. I shall always think of Leon any time I enter a restaurant’s restroom that has been clumsily and cruelly targeted by Big Brother.

You have seen the invasive tentacles of the Deep State yourself every time you go into a restaurant’s restroom. Ponder that dictatorial sign from the Health Department on the wall that states: “Each Employee’s Hands Must Be Washed Thoroughly, Using Soap, Warm Water and Sanitary Towel or Approved Hand-Drying Device Beginning Work and After Each Visit to the Toilet.”

On said sign at Leon’s workplace, someone had hand-written in ink, “Especially Leon.”

But seriously, folks, this handwritten addendum to the Deep State’s sign is a direct attack on Leon’s ability to decide for himself whether or not to spread germs in the manner that he deems fit. Why should Leon – or anyone else – have to wash his hands if he doesn’t want to?

Holy Typhoid Mary, the Deep State is once again interfering with our freedom. One can make the argument that Leon is facing a hostile work environment. Leon’s pain and mental anguish from this outrageous infringement on his freedom can only be eased by the application of a large money poultice, which can be secured after lengthy litigation and substantial attorney fees. I liken Leon and his heroic fight for the right to work with dirty hands to Mel Gibson in “Braveheart,” who shouts, “They may take our lives, but they can never take our freedom to handle food with germy hands!”

Regulations are bad. They stifle competition and keep Darwinism from evicting people who want to make dangerous choices from the gene pool. If some people want to eat Tide Pods, it is their God-given right to destroy their gastrointestinal systems.

The Deep State has no right to try to prevent the pursuit of foaming at the mouth or self-infliction of excruciating abdominal pain. The people have no Tide Pods? Let them eat at a restaurant where Leon works. The Tide Pod eaters may end up in the Saint Hubris Hospital for the Mentally and Gastronomically Challenged, but that is their right.

Just because you can do something, means you should do it. If, for example, say a future presidential candidate were to travel to a faraway capital of a communist country, and while there, decide that he wants to enjoy a flood of entertainment by, as Putin put it, “Girls of reduced social responsibility,” if he can afford to hire such entertainers, who are we to say that would be wrong? If it can be done. It should be done. As the King of Siam once said, “So let it be written. So let it be done.”

If we accept the proposition that the Deep State is out to ruin America by regulating such piddling things as hand washing, drilling for oil in national parks or supporting public education, then it’s time to end those things.

All those post-apocalyptic movies and TV programs that show people murdering and eating each other after society collapses are just scare tactics from Hollywood and its evil twin the Deep State. We don’t need no stinkin’ rules. Rules are for sissies who can’t take care of themselves and have to rely on the Nanny State to impose order. As Chairman Mao once said, “Political
power grows out of the barrel of a gun.” It’s every man for himself. That old saying about sinking ship protocol, “Women and children first,” is so yesterday.

If The Donald wants to make the Chinese company ZTE great again by saving 75,000 Chinese jobs after his lovely daughter Ivanka gets a bunch of new trademarks from the Chinese government to sell books and various housewares in China, what of it? The Constitution’s Emoluments clause is a relic of the past. Constitutional limits preventing a President from financially benefitting from his office by doing favors for foreign interests are just the Deep State’s way of messing with the entrepreneurial spirits of Oligarchs.

If Leon has dirty hands, he is not alone.