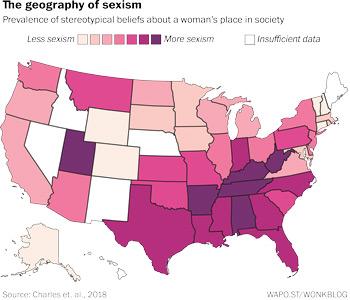 We are a nation beset by “isms” – racism, ageism, extreme nationalism, provincialism and, certainly, sexism.

While we might suspect and even recognize the painful damage isms inflict on the victims of our various prejudices, real data are hard to
come by. That makes results of economic research released earlier this month more eye-popping, showing real impacts sexism has on women from the cradle to the grave. It is not a pretty picture and is uglier in some places than in others.

Anecdotal evidence of the impact of sexism abounds. Think about the stories that emerged and are continuing to emerge from the #MeToo
movement. Think about the women who report suggestions they have made at work that are ignored until a man makes the same suggestion, and everyone proclaims it a great idea. Think about the woman in the workplace who was asked, “Is there a man I can talk to?” or the attorney
arguing her client’s case with an opposing attorney who interrupted her with, “I think you need to take a Midol and call me back when you feel better.” There’s the women who were waiting to meet with their company’s CEO, who walked in and asked, “Where are all the guys?” These are all incidents reported last year in The New York Times.

Now comes research from economists at the University of Chicago, Northwestern University and the National University of Singapore, which finds that where an American woman is born matters and has real and lasting impacts on how much she works and earns as an adult. In other words, her life and income are affected by the degree of sexism in the state in which she was born.

The research used data from the U.S. Census Bureau and the General Social Survey, a biennial national survey looking at Americans’ beliefs on a wide spectrum of subjects and issues. It shows what we all know – that there is a gender gap between men and women when it comes to income. It also shows something we did not know – that the gap is greater when the women come from highly sexist states.

What are those highly sexist states? Alabama, West Virginia, Utah, Alabama and Tennessee are in the top tier of sexism. North Carolina and most other Southern states fall into the second tier of sexist states.

States with low levels of sexism include Alaska, Connecticut, Wyoming and Vermont.

What is particularly troubling about the research findings is that it does not seem to matter whether the woman moves away from her sexist state to a less sexist place. Income inequality in the workplace follows her wherever she goes throughout her life. A woman born in a highly sexist state is more likely to have a child earlier in life and to leave the workplace than a woman born in a less sexist state, decisions that have a lasting impact on her earnings. Researchers say women appear to internalize the social norms of the places where they grew up, including beliefs about the roles of women in both home and workplace, the appropriate time to have children and the value of women’s work in all aspects of life.

Interestingly, sexism does not follow the same state lines as our partisan political red-blue divides. Wyoming and Alaska, among our least sexist states, reliably vote Republican, and several reliably Democratic states, including Illinois and New York, show up in the middle when it comes to sexism.

No one escapes prejudices, either as a bearer of them or as a victim of them. All we can do is be aware of them and do our best not to pass them along.