Yes, it can happen to you 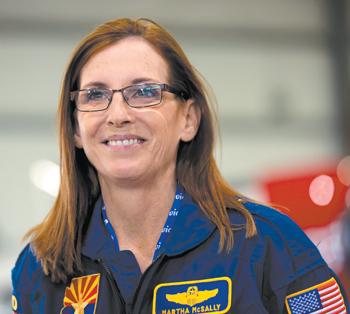 U.S. Sen. Martha McSally, R-Ariz., stunned her Senate colleagues and her fellow Americans last week by revealing at a meeting of the Senate Armed Services Committee that a superior officer raped her during her 26 years of service as an Air Force fighter pilot.

Her disclosure comes on the heels of a similar admission in January by Sen. Joni Ernst, R-Iowa, that she was raped while she was in college and was later abused physically and emotionally by her husband. U.S. Rep. Kate Porter, D-Calif., has also said she was a victim of domestic abuse during her marriage.

Make no mistake. McSally was the first woman to fly as an Air Force fighter pilot, hardly a job for the faint of heart of either gender. McSally, Ernst and Porter have also made their ways to the highest level of our government, elected by millions of Americans to represent their interests in Congress — also not responsibilities for the faint of heart.

In other words, these women and millions of others less well-known are not people we would think of as likely victims.

At the same time, they are also not unusual. McSally said in interviews that she did not report the assault at the time because she did not trust the system. She was correct in her assessment. When she began talking about her experience, she said, “I felt like the system was raping me all over again.”

Ernst and Porter also began speaking about their experiences long after the fact.

Ours is a military community, and it defies reason to imagine that women — and some men — who are our friends and neighbors have not experienced sexual assaults. Such assaults are notoriously difficult to prosecute because they occur in private and involve “he said, she said” evidence in which the perpetrator says sex was consensual and the victim says it was not. The mostly male military culture coupled with its hierarchical structure mean that many victims make the same choice McSally made not to report what happened to them. Someone reading these words may well have made the same decision, often out of fear of career-changing retaliation.

There are some positive signs, though. The Defense Department claims reporting is up by 10 percent across the services. The change is even more dramatic at our nation’s service academies, where reports of sexual assaults are up 50 percent. Disclosures by victims like these women in Congress and other public figures also shine light on such crimes and encourage other victims to come forward.

Also, slow-as-molasses Congress is taking such assaults more seriously. Led by Sen. Kirsten Gillibrand, D-N.Y., now a candidate for president, lawmakers have removed the statute of limitations on assault and rape cases, criminalized retaliation against people who report such crimes, and mandated dishonorable discharges of dismissal of service members convicted of sexual assault or rape.

Efforts to remove sexual assault cases from the military decision-making chain of command and put them directly in the hands of military prosecutors have thus far failed but could be reintroduced as spotlights continue to shine and get brighter.

It is clear that McSally, Ernst and Porter felt alone with their experiences, as do victims in our community. There is help.

Rape Crisis Volunteers of Cumberland County has assisted people in need of support since the late-1970s. The phone number is 910-485-7273. The National Domestic Violence hotline does the same at its website or by calling 800-799-7233.

Photo:  U.S. Sen. Martha McSally, R-Ariz., was the first woman to fly as an Air Force fighter pilot. She recently revealed that she was raped by a superior officer while serving her country. Photo by Gage Skidmore on Wikimedia Commons