Snakes on a stick 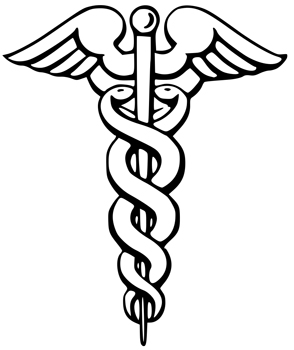 Have you ever wondered how a snake wrapped around a stick came to be the symbol of physicians? Probably not. Bear with me anyway.

Maybe you just wondered how long Dook will keep recruiting One & Dones and not winning the basketball championship. How long before Coach K finally realizes that sending out a different flock of freshman each year into the Big Dance isn’t getting the job done? But that is a story for another day.

Today, we are going to try to answer Greek mythology’s version of Samuel L. Jackson’s classic statement in the greatest movie ever released in 2006, the immortal “Snakes on a Plane.” In that movie, Sam uttered the immortal words (herein cleaned up, as this is a family newspaper), “I’ve had it with these gosh darned snakes on this gosh darned plane!”

Today, we shall learn how that gosh darned snake got on the doctor’s stick.

Once upon a time, a major Greek god named Apollo got up close and personal with the lovely goddess Coronis. From this union they begat their son Asclepius. Because his name was so hard to pronounce, his buddies just called him Asky. Coronis, being a big ole friendly gal, was just too frisky for one man to keep her satisfied. While preggers with Asky, she went off on a long weekend to Myrtle Beach during the high holy days with her old boyfriend, Iskhys.

A little bird, a raven, told Apollo about Coronis’ dalliance with Izzy. This did not sit well with Apollo. Apollo sent his cranky sister, Artemis, to kill Coronis. She whacked Coronis using a bunch of arrows covered in plague juice.

Apollo put Coronis to barbecue on the old funeral pyre with Asky still in utero. At the last minute, Apollo decided that his son didn’t need to pay for the sins of his mother. He yanked Asky out of Coronis, saving Asky’s life.

Apollo felt kind of sorry for having Coronis killed, so he did what men in power always do. He blamed someone else.

Back to our story. Apollo hired the centaur Chiron to raise Asky. Chiron was at least as smart as the famous Mr. Ed. Chiron taught Asky how to heal people. Asky turned out to be an apt pupil. He got so good at healing people that, on occasion, he even raised people from the dead.

Asky, being a universally kind person, went out of his way to be nice to a snake. The snake turned out to be enchanted and could whisper. In a fit of gratitude for Asky’s kindness, the snake licked Asky’s ears clean. While the snake was licking, he whispered into Asky’s ears many secrets for healing the sick.

There are other versions about how the grateful snake ended up on Asky’s rod. One version is based on the “worm theory.” Back in the olden days, it was not uncommon for people to have a long, parasitic worm invade their bodies. In order to get the worms out of people, the physician would make a cut in the person’s body in front of the direction the worm was heading. The worm would poke his head out of the cut. The physician would then wrap the worm around a stick —like wrapping spaghetti around a spoon.

Another version says when God sent fiery serpents to bite the Israelites who had been disobedient to Moses, Moses put up a pole with a bronze snake on it. An Israelite who looked at the bronze snake on the pole would not die from snake bites.

As a result of all these stories, the snake wrapped around a rod became the symbol of physicians.

Under the heading of “no good deed goes unpunished,” all of this healing by Asky began to irritate Zeus, the king of the gods. Zeus was afraid that Asky going around healing people and raising the dead might ultimately result in Asky making peoplekind immortal.

The last straw for Zeus occurred when Asky brought Hippolytus back from the dead and got paid for it. Zeus did not want a bunch of humans becoming immortals as rivals to the existing gods. So, Zeus went to his friendly one-eyed neighborhood lightning bolt fabricator, the Cyclops. Using a coupon, he bought a thunderbolt. Zeus then zapped Asky with the thunderbolt, causing Asky to expire.

Asky’s dad, Apollo, was not happy that Zeus killed Asky but was afraid to take on Zeus. Instead, Apollo killed the Cyclops for making the thunderbolt.

Predating the National Rifle Association, Apollo reasoned thunderbolts don’t kill people, Cyclops kill people. As a consolation prize for being dead, Zeus picked up Asky’s lifeless body and hung it in the sky in the constellation Ophiuchus, the Serpent Holder. Asky remains hanging in the night sky in his very own constellation to this very day. Go out tonight and take a look up at Asky.

And now you know the rest of the story. Snakes on a stick — or on a plane. It’s all the same. Like Roseanne Roseannadanna once said, “It’s always something.”