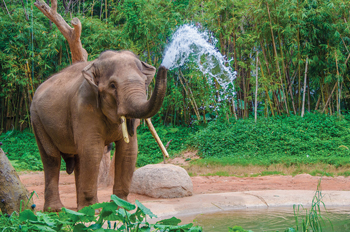 April is now officially the month of underdogs. Admit it, once upon a time you used to be a kid. If you were lucky, your parents read you stories before you could read. If you were really lucky, you heard the story of Babar the Elephant. To refresh your recollection, here is the Reader’s Digest version of Babar’s story. It gets kind of weepy at the beginning. If you are tenderhearted, you may wish to skip the rest of this column. But hang in there, it has several happy endings.

Our story begins with baby Babar riding on the back of his Mother through the jungle. Babar was as happy as Bambi was with his Mom before man came into the forest. However, a Hunter is hiding in the bush. The Hunter shoots and kills Babar’s Mother.

Babar cries but escapes the Hunter.

Babar runs away and ends up in the City, where he meets a very friendly Old Lady. She buys him an excellent green suit and hires tutors to educate him. Babar becomes quite the sophisticate as he dwells for several years in the City.

Eventually, his cousins Celeste and Arthur come to the City. They convince him to return to the jungle. Babar gets back to the jungle just as the King of the Elephants has become very sick after eating a poisonous mushroom. As luck would have it, the King dies shortly after Babar’s arrival. The other elephants decide Babar’s education among humans make him the perfect candidate to be the new King of the Elephants. Babar is crowned King. He marries his cousin Celeste because that’s what royalty does; they marry close relatives to maintain a grip on power and to develop hemophilia.

Fast forward to April 2019 in South Africa. There are still hunters in the jungle. Five of them snuck into the Kruger National Park to illegally hunt rhinos. Earth has a limited supply of rhinos, estimated at about 20,000 in South Africa. Their numbers dwindle each year due to poachers. Most rhinos are not a match for high-powered rifles.

But on this day, the rhinos had a friend in high places, a cranky elephant. Our poacher buddy, let us call him Slim, was hunting rhinos to sell their horns to doofuses in China, who think the horns are an aphrodisiac. While hunting rhinos, Slim got too close to an elephant whom we shall call Babar Jr.

Slim’s buddies pulled his flattened body out on a road so he could be found by the authorities. His pals then high-tailed it out of the park, leaving Slim like a pork chop in an outdoor meat market.

Unfortunately for Slim, before the authorities could find his body, the lions found him first. Slim became lion chow. The search party finally found what was left of Slim near the Crocodile River. After the lions got through with him, all that was remained of Slim was his skull and a pair of pants. That was mighty slim pickings.

But it was a happy ending. Jungle Animals: One. Poachers: Zero. For one brief, shining moment, the animals were the winners. Rhinos, elephants and lions don’t often win against the hunters. But when an underdog wins, we all win. Maybe the next time the Trump boys, Don Jr. and Eric, go big game hunting for elephants, they will meet up with Babar Jr. before they can shoot him.

In keeping with April being the month of underdogs, Tiger Woods finally won the Masters again after 11 years of wandering in the rough of the golfing wilderness. Huzzah for Tiger. He kept at it.

The same week, Chris Davis, a member of the Baltimore Orioles baseball team, ended his longest hitless streak for a nonpitcher in the history of major league baseball. Davis had gone without a hit in his last 54 times at bat, stretching all the way back to last season. Thanks to Davis, the Orioles won the game. Don’t feel too sorry for him. Davis is getting paid $161 million dollars as part of a seven-year contract. He will be alright.

So, what have we learned today? Sometimes karma works and an elephant will caress a bad guy with his toes. Lions don’t require Texas Pete hot sauce when eating a poacher pancake. Tiger Woods and Chris Davis prove that persistence pays in all areas of life. If you give a monkey a typewriter, he will eventually type a column. The very existence of this column is proof of the typing monkey theory.