Splitting the blanket down the middle 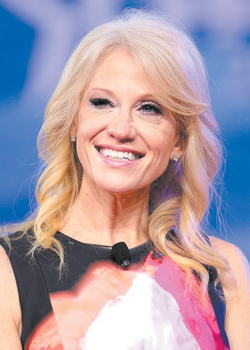 Even Hollywood screenwriters would be hard pressed to come up with this wild scenario — even though it does have the makings of a hit movie.

A top aide to the president of the United States and leader of the free world is married to a man who advocates for her boss’s impeachment on the op/ed pages of The Washington Post. The aide has the gift of gab and can spin anything for the president. Her husband practices law and wordsmiths the president’s demise on the side.

She is the aide who told ABC “the president is not going to jail. He’s is staying in the White House for five-and-a-half more years.” He is the spouse who takes a lesson from the president’s own playbook, referring to him as “Deranged Donald” and repeatedly calling for Trump’s impeachment.

It is a fair guess that the Conways’ pillow talk is a lot different from what Hollywood screenwriters penned for Doris Day and Rock Hudson way back when. Even Trump has jumped into the Conway fray — on Kellyanne’s side, naturally enough — describing his loyal aide’s husband as a “stonecold loser and husband from hell.”

The Conways, worth $39 million according to financial disclosures, reportedly live with their four children in a 15,000-square foot home in a tony Washington neighborhood, which is probably a good thing. It is certainly understandable if they each need a little space to themselves.

In fairness, none of us knows what is going on in other people’s marriages, and certainly not in those of people we only read about and see on television. But is it fair and interesting to view the Conways as a metaphor for what is going on all over our nation — in marriages, in workplaces and among friends and neighbors.

No one is neutral on Trump. Some of us adore his candor, if you describe his public utterances as “candid.” Some of us are so repulsed by our president that we can barely listen to him. And some of us are just praying for this to be over soon. We all have our own opinions about Trump, and Kellyanne and George Conway are doing a great job of laying out and articulating our great national divide.

Our national landscape is now so deeply bifurcated that millions of us no longer feel the same way about friends, neighbors and even relatives who hold political views, and especially views about Trump, that differ from our own. We are now isolated in Camp Donald Trump and Camp Anybody but Donald Trump, and there appears to be little appetite for or interest in crossing the great divide from either camp.

This cannot be good for our nation today or for our democracy in the long run.

There is always the chance, of course, that the Conways are conning us. Maybe he is her insurance policy in case Trump does implode, and maybe she his lucky government charm in case we do face four more years. But I think not. The Conways seem deeply and seriously entrenched in their positions, very much lacking the humor and deftness of another politically divided long married couple. Republican Mary Matalin and Democrat James Carville have sparred with each other for years and do so with wit and affection. They do not name-call or aim for the jugular.

So, in the tradition of the cliffhanger, are the still-married Conways a sign that ordinary Americans might survive our ongoing great divide? Are Kellyanne and George symbols of hope for the rest of us? Or do they bode a more permanent schism in our national unity? Will they, as Buck Owens so poignantly sang, “split the blanket down the middle,” or will they find a way to be cozy as a family in their Washington mega-mansion?

Only time will tell.