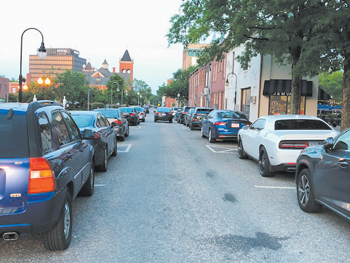 Fayetteville is dealing with a tremendous challenge regarding downtown parking. In the big picture, paid parking in city lots that has been instituted during baseball games is adversely impacting businesses and those who work downtown. A further complication is that people who want to go downtown during a game but not attend the game find it difficult to locate free onstreet parking. This condition is caused, in great part, by game attendees using on-street parking. Fayetteville City Council is looking for a solution to this problem.

As Council and others decide on a course of action, the starting point should be clearly defining city government’s overall goal regarding conditions in the downtown area. The following statement appears on the city’s website under “Economic Development”: “The City of Fayetteville’s vision includes a vibrant downtown and a strong local economy. The activities included in this section focus on small business development activities with a concentration on economic development activities in the downtown area in support of the Fayetteville Renaissance Plan and the City’s redevelopment plan areas throughout the community.”

This parking challenge should be addressed in light of that overall desired condition for the downtown area. The next step would be to honestly define our circumstance. This step is critical because, if it is not executed, we run the risk of taking a cookiecutter approach. That approach would be concluding that we can just do what other cities do and all will be well. The problem is that serious examination of our circumstances might show that we are not so much like other cities — that we cannot simply do what they do by way of downtown parking.

For example, does our downtown offer a similar variety of businesses and general experiences as cities being looked at as models of what might be done regarding parking? There are some wonderful restaurants downtown, but since I live in the north area, I can drive a much shorter distance to great restaurants that offer free parking. As much as one appreciates what is downtown, will the average person drive there and pay to park?

I fully recognize that attitudes change over time. However, although I have not been able to confirm it through media reporting, several people have stated that parking meters were removed from downtown during the 1970s in an attempt to attract people to the area. My sense is that the 1970s thinking about paying to park downtown, when free parking is available elsewhere, has not dramatically changed. In Raleigh, Charlotte, Winston-Salem and so on, people likely expect to pay for parking. Their only concern might be how much they pay. I do not think that Fayetteville is at that point.

Now, what seems to be Council’s thinking as to what any corrective action should aim to accomplish? The following statement appears, with the new rules, on the City’s website at fayettevillenc.gov/community/gettingaround/downtown-parking:

“Unfortunately, evening on-street parking has become increasingly difficult to find since Segra Stadium opened. The change in enforcement is designed to move long-term parkers coming downtown for events into the ample off-street parking available in city and privately owned lots in the downtown.”

To achieve the goal of making on-street parking more available through regular turnover, Council plans to implement paid parking in most city-owned lots and for on-street parking spots. New parking rules have been published and will take effect during the next six months.

I would summarize that serious examination of our circumstances might show we are not so much like other cities, based on information from: https://fayettevillenc.gov/community/getting-around/downtown-parking and an article by John Henderson titled, “Council endorses proposal to enforce downtown Fayetteville parking time limits”:

“On-street parking is presently limited to, depending on the location, two or three hours, 9 a.m. to 5 p.m., Monday through Friday. There is no charge for this parking. Parked cars are monitored by roving personnel and tickets issued where appropriate due to overstays. Effective 15 July, this program will shift to being in effect Monday through Saturday, 9 a.m. to 9 p.m. That will continue through Dec. 31. It is expected that as of Jan. 1, 2020, pay kiosks will be in place for on-street parking. At that time, and beyond, metered parking will be used to accomplish the desired regular turnover of on-street spots. The cost will be $1 per hour.

“There are two types of city lots; paid and timelimited. Starting on July 15, 2019, these lots will require payment or adherence to the time limits, Monday through Friday, 9 a.m. to 9 p.m. The only time-limited lots are one behind City Hall and one adjacent to the police station. The city lots that require payment can be identified by the legend, on a map at https://fayettevillenc.gov/community/ getting-around/downtown-parking/regular-parking, as Monthly Leased Parking, Pay Upon Exit/Monthly Leased Parking, Pre-Pay Parking, and Pre-Pay/ Monthly Leased Parking. Parking is free and time unlimited on Saturday and Sunday in all city-owned lots. During event days, parking off-street in all city-owned lots will be $5 per vehicle beginning two hours before the start of events.

It would appear that the goal of having on-street parking turn over regularly could be accomplished without going to paid parking. The time limits for on-street parking now in place, maybe with some tweaking, could accomplish that end. This approach will be employed until metered parking is in place.

That raises the question of to what extent revenue generation for the city comes into play with Council’s move to paid parking. The following was written by John Henderson in an article titled “Fayetteville’s $10 parking fee brought in money, but also ill will,” in regard to comments by Mayor Mitch Colvin: “Colvin said that the city has been losing about $250,000 on its downtown parking enforcement that is being covered by property-tax payers, so it’s nice to have some revenue stream to offset this expenditure.

Granted, the income referred to in this article was before event parking was reduced from $10 to $5. However, when the city has been losing money on parking, increasing parking revenue has to be attractive to Council. Colvin, however, cut to the heart of the matter. If increased revenue comes at the expense of losing businesses, and visitors, from the downtown area, the outcome is a negative for the city.

Loss of businesses and visitors is likely. “Some owners selling downtown businesses say parking a factor,” another article by John Henderson, supports this conclusion. From the article: “After two decades of operating the popular downtown coffee shop Rude Awakening on Hay Street, Molly Arnold has put the business up for sale.

“She said the city’s plans to implement paid parking for on-street spaces in the downtown area, as well as the reduction in business from the paid parking plan implemented by the city during Woodpeckers baseball games, is taking a toll on small businesses like hers and was a factor in the decision.

“She also has put her White Trash gift shop on Franklin Street on the market.”

Based on comments from owners, the article goes on to report: J&M Vapor Store is moving from Hay Street to Russell Street; business has suffered at Cameo Art House Theatre; Sweet Palette bakery’s business has suffered. It appears safe to conclude most, if not all, downtown businesses are being adversely impacted by the current parking situation and will continue to do so under the new plan. Add to this the negative impact on people working downtown.

Downtown parking should be assessed in terms of Council’s aim for the area, strength of the downtown draw for visitors, public attitude toward paid parking, cost/benefit of revenue generation while losing businesses and downtown visitors. I think this approach would produce major changes to the plan summarized above.